Ocean and air freight rates and trends; trucking and customs news for the week of September 18, 2019. 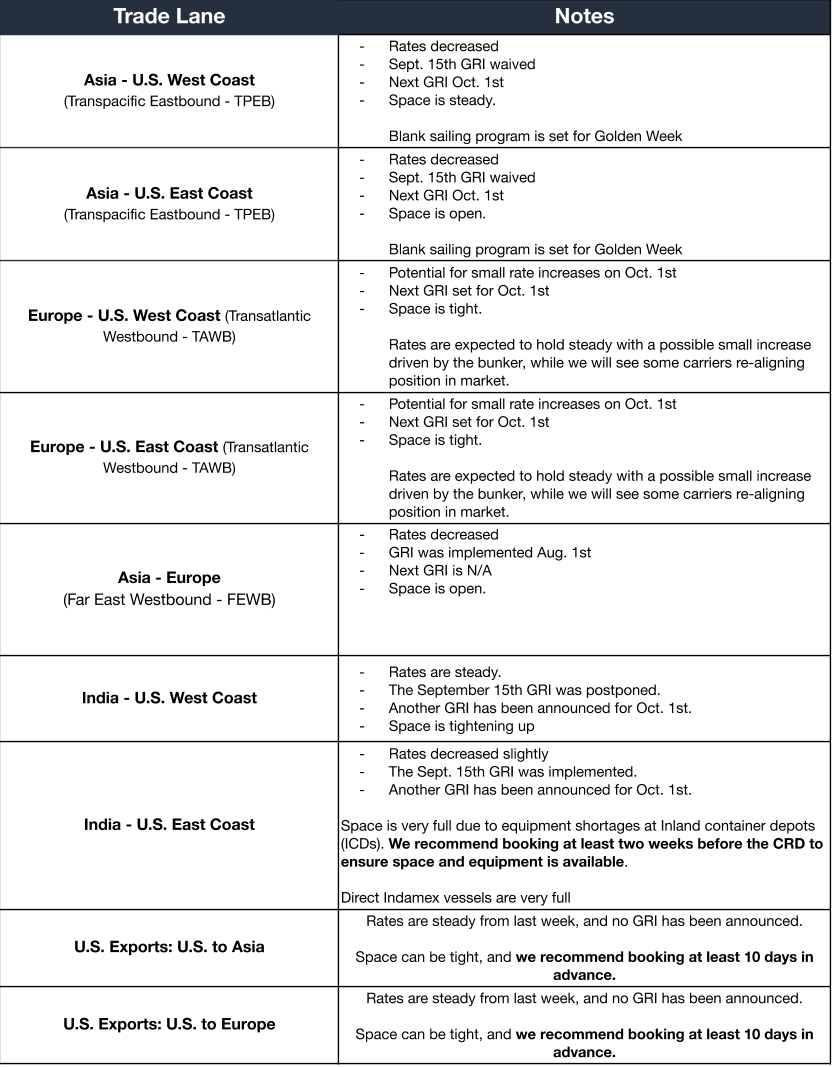 Global Services Trade Set to Slow, According to World Trade Organization The World Trade Organization released a report stating that global service trade — covering information technology, and travel, and more — may soon be impacted by the ongoing trade war between the U.S. and China. The services sector accounts for 80% of economic activity in the U.S., meaning the waves of the trade war may become more amplified as it drags on.

Online Grocery Businesses Driving Fulfillment Innovation So far online grocery stores have grown more than 15% and drawn investment from some of the largest retail brands in the world. As the popularity of online grocery services has risen, many of the companies have sought out innovative solutions for order fulfillment, including the use of robotics.

Section 301 Trade Updates President Trump delayed the 5% tariff hike for Section 301 goods under lists 1, 2, and 3 from 25% to 30%. He moved the implementation date of the hike from October 1 to October 15. China also announced some exemptions from its recent 25% retaliatory tariffs that were imposed on U.S. goods, including list 1 and list 2 tariff numbers that will be excluded. The USTR also released some new product exclusions that covered 437 specific products over the 3 lists. Here is list 1, list 2, and list 3. The two sides are scheduled to meet for further negotiations in October.

Ongoing USMCA Ratification Negotiations Robert Lighthizer has been working with House Democrats on some re-writes to the new USMCA deal after sitting dormant during the August recess. There is some renewed hope that these rewrites over the next few weeks will get USMCA on track for ratification by Congress before the end of 2019. The main sticking points have been labor rules, environmental rules, access to affordable medicines, and other enforcement mechanisms. The House Democrats are hopeful that the new re-writes will satisfactorily address these areas but are skeptical the proper controls and enforcement mechanisms will all be in place.

US-Switzerland Trade Deal Some lawmakers have pushed the administration to start working on a trade deal with Switzerland. They hope that it would go to the front of the line in terms of priority. A letter from Don Beyer — with bipartisan support — stated that an FTA with Switzerland would be beneficial because of the country’s high standards of labor and environmental protections already in place.

Mis-declaring Value Lands Importer $650,000 Fine A company named Miroglio USA was fined $650,000 for mis-declaring the value of its imports, including multiple sales directly to U.S. customers. Miroglio Textile (a sister company) then created false invoices that showed fake sales prices that were used on their customs entries during import to the U.S. The goods were heavily discounted on the invoices, so the Italian company could pay less in duties upon importation. During the case, it was found that Mirolglio USA never paid anything to Miroglio Textile and there was never inventory exchanged outside of a handful of samples. The goods were sent directly to customers which meant that Mirolglio USA never had a role in the terms of sale and should not have been included in the transactions when it came to assessing the value of the goods.