Ocean and air freight rates and trends; customs and trade industry news for the week of January 8. 2020. 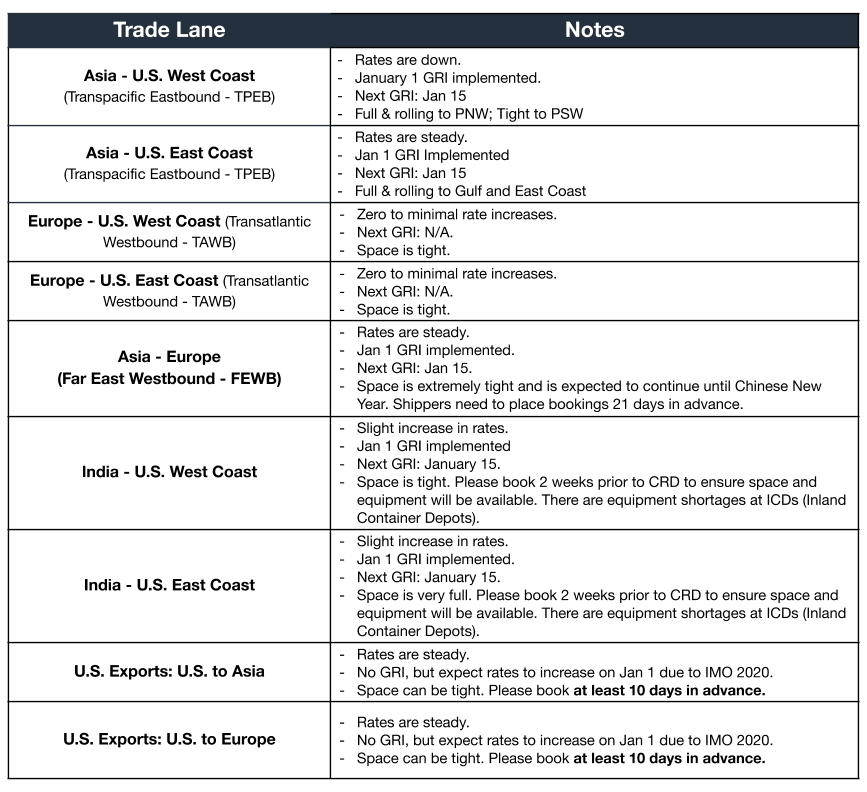 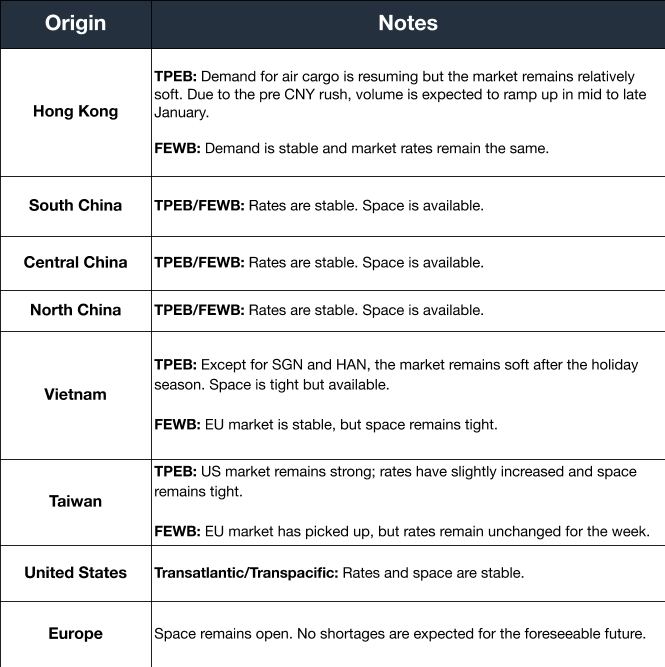 Low-Sulfur Fuel Surcharges Raise Shipper Suspicions Fuel surcharges on the eastbound Trans-Pacific route confound shippers. This week’s all-inclusive spot rates are comparable across carriers, but an added fuel component ranges from $30 to $327 US per FEU, according to Journal of Commerce. While carriers have warned of surcharges to offset IMO 2020 requirements, such swings have raised concerns of price-gouging.

EPA Plans to Clean Up Trucking Emissions The Environmental Protection Agency (EPA) has announced its plans to roll out a Cleaner Trucks Initiative to reduce NOx emissions, reports Transport Topics. The agency seeks public comments until February 6 and will use them to inform a “holistic rethinking of emission standards and compliance.”

US tariffs in 2018-19 harmed manufacturing employment more than they helped it, according to new research by two Federal Reserve Board economists. Direct protection increased employment by 0.08%, but input costs and foreign retaliation decreased it by .46% and .51%.

Crude oil prices jumped as tensions rose between the United States and Iran, following the US strike that killed a top Iranian general. Brent crude topped $70/barrel, up 6% from New Year’s Eve and up 21% from a recent low in early October.

President Trump announced a trade deal will be signed January 15 during a visit from a high-level Chinese delegation. The text of the deal has not yet been released, though USTR released a fact sheet last month.

The ISM index showed its lowest reading since June 2009. The Cleveland Fed President attributed this to weak growth abroad and trade policy uncertainty.

Section 301 List 3 Exclusions Granted The USTR issued a list of new product exclusions that were on List 3 at 25%. The new list covers 66 specifically prepared product descriptions along with two bicycle HTS numbers with no additional specifications. As with previous lists, they are retroactive to September 24, 2018 and will remain in effect until August 7, 2020.

Reminder: Section 301 exclusions for list 4a need to be submitted by January 31st.

US-JP Free Trade Agreement The US-Japan trade agreement that went into effect starting January 1st was not added to ACE during the update. CBP stated in a CSMS message that importers filing entries on goods that are eligible for the US-JP trade agreement will need to pay duties and file a post-summary correction to get the duties back. The SPI indicator "JP" was missing from ACE, but will be added during a January 14th ACE update. To recover duties covered by the trade agreement, PSC's will need to be filed for eligible entries between January 1-13th.

Maximum Penalties Going Up The US Commerce Department released its list of civil monetary penalties that are set to rise because of inflation. Most of the changes were under $5k. In all, 59 maximum penalties were raised. The new amounts will apply to penalties issued after January 14th.