Recent news and updates related to the ocean and air freight market for the week of August 23, 2017. 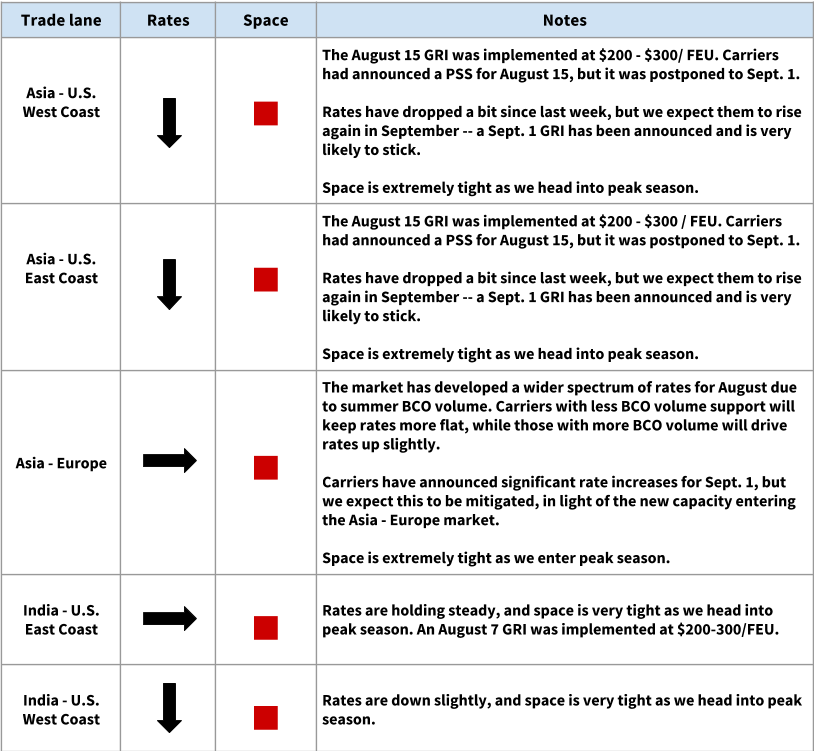 Volumes are up as businesses prepare for the winter holidays. As indicated above, rates are down slightly along some lanes this week, but we expect them to rise with the September 1 GRI.

Space is very tight on all major lanes. Plan ahead and book in advance as much as possible! (See more peak season tips here.)

As rates fluctuate, keep in mind that Flexport rates are always inclusive of GRI and PSS.

Over the next two years, capacity on Asia - Europe will increase by 23.2 percent, which will test carriers' ability to keep rates high on this lane. As mentioned above, we expect this increase in capacity to help mitigate carriers' announced rate increases.

Typhoon Hato causes delays and cancellations out of HKG, SZX, and CAN

Flights out of HKG were canceled on Wednesday, August 23, and airlines will be recovering for 48-72 hours afterward. You can expect delays if your cargo is flying into, out of, or through HKG, SZX, or CAN within the next week or so.

As we’ve noted previously, this has been a huge year for air freight. As we head into peak season, demand will continue to climb, and capacity will tighten further; rates will continue to go up.

The first half of 2017 recorded the strongest air freight volume growth for any first half-year (January-June) since 2010: 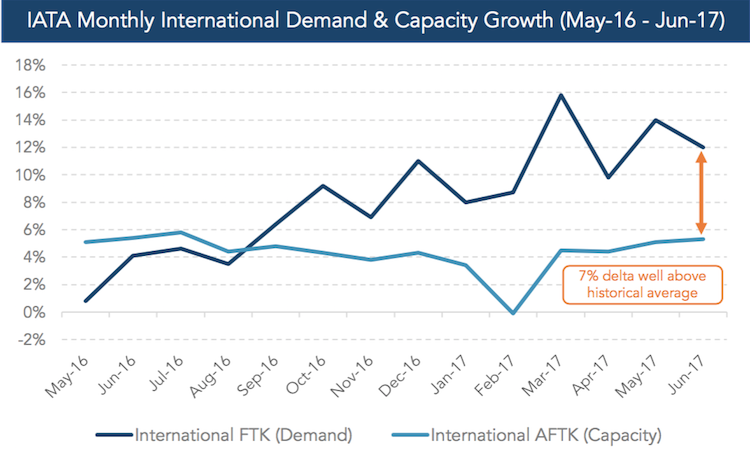 Air freight rates ex-Asia are expected to rise for the balance of the year, while more stability is expected on trans-Atlantic lanes.

Flexport’s LCL service has expanded to include Xiamen to Los Angeles and Oakland! Learn more about our in-house LCL service here.

Congestion and chassis shortages in Chicago, Baltimore, and Nashville

We’re seeing issues at the following ports and terminals:

If your cargo is being routed through any of those ports / terminals, you may see chassis split fees and/or storage fees if your trucker needs to make an extra trip to pick up a chassis.

The impact of Hurricane Harvey is severe; as the hurricane made landfall in Texas, winds and flooding continued at historic levels. Port Houston facilities were closed Friday, August 25 at noon, and will be closed Monday, August 28. We expect delays for any containers due to be offloaded from a vessel in Houston, loaded onto the rail, or drayed to final destination.