Recent news and updates related to the ocean and air freight market for the week of September 28, 2017. 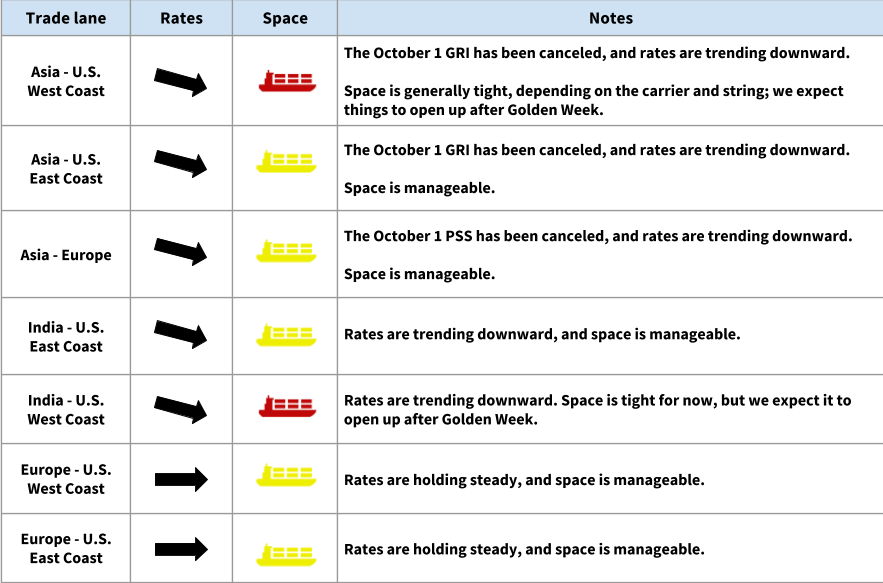 Golden Week is coming up October 1-8; during this national holiday, factories in China will be closed. Carriers have announced a number of blank sailings for the week following, in an effort to bring supply in line with reduced demand.

Congestion at Prince Rupert is improving

Dwell times are beginning to come back down at the Port of Prince Rupert, although some carriers will continue to divert cargo to Vancouver for the next few weeks.

Air rates are still high, and capacity is even tighter

As we’ve noted previously, this has been a huge year for air freight. We’re in peak season, and space is extremely tight in advance of Golden Week.

We expect peak season -- with its high rates and tight space -- to last longer than usual this year. This is partially due to the November launch of the iPhone, which will eat up a lot of capacity and may affect rates and space all the way through to January.

Fuel surcharge increase for cargo out of Hong Kong

Air carriers have announced an increased fuel surcharge of $0.09/kg for freight out of HKG. This increase, as set out by the Hong Kong Civil Aviation Department, corresponds with the rising price of oil.

We’re happy to announce that Flexport’s in-house LCL service has expanded to include more than 300 lanes, including blanket coverage in all of the mainland United States!

Labor action at the APL terminal in LA

Picketing at the APL terminal in Los Angeles began on Thursday. The terminal will continue to be closed on Friday (and possibly into next week). Trucks are not able to pick up from the terminal until the matter is resolved, which may result in delays and/or demurrage fees.