Freight Market Updates Live: Get the latest information on the ocean and air freight markets by region. Spend 30 minutes with our experts, including time for Q&A. 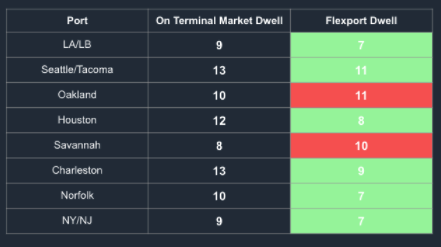 Flexport is outperforming market averages in major markets. Flexport achieved this success by building capacity and carrier depth in all markets, and following the trucking strategy of centralizing volumes with a handful of carriers to gain leverage and preferable treatment has paid off. We expect Savannah to drastically improve as we increase our dedicated assets in the area that also includes 50 dedicated chassis. Oakland is facing separate challenges with port congestion, chassis shortages, and an upcoming vote about relocating the A’s stadium to port property. Flexport is expanding our capacity, our carrier ITS is opening a large yard and deploying chassis nearby in Richmond, VA. 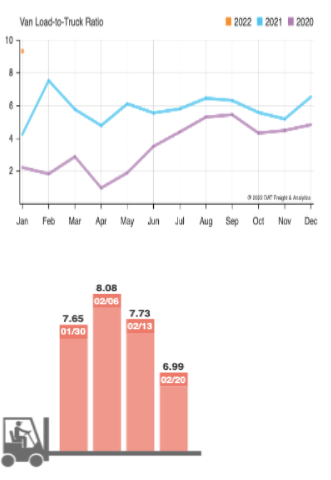 Source: https://www.dat.com/industry-trends/trendlines/van/demand-and-capacity *Load-to-truck ratios represent the number of loads posted for every truck posted on DAT Load Boards. The load-to-truck ratio is a sensitive, real-time indicator of the balance between spot market demand and capacity. Changes in the ratio often signal impending changes in rates.

CBP has provided some hints at new FTZ rules they seek to enshrine into the Code of Federal Regulations. Jim Swanson, Director of CBP’s Cargo and Security Controls Division, indicated the new regulations would involve procedures done in the e214 form trial run, changes to the five-day rule to simplify logistics, and the elimination of form 216.

Resulting from a resumption of regular movement crossing the Ambassador Bridge, CBP will no longer process formal entry shipments through the Detroit-Windsor tunnel. CBP instead will “return to normal processing of very limited commercial traffic of "Brass" and "Informal" Entries.”

CBP has issued a federal register notice seeking comments from the Trade community on collecting additional information for CTPAT’s vetting process to allow CBP to identify potential violators. Additional information sought if and when CBP implements the changes would include date of birth, country of birth of the stakeholder in question, and an IP address for law enforcement purposes. Current or prospective Flexport clients seeking to submit comments should contact their assigned team or reach out via the Flexport website.

Demand for shipper-owned containers on the rise The Loadstar has reported that freight forwarders are increasing the dependence on shipper-owned containers, or SOCs, as a strategy to address supply-chain pressures and improve reliability. A study has reported that the percentage of the top 50 forwarders accepting SOC requests has risen from 6% in 2019 to 18% in 2021.

Port of Los Angeles achieves record-hitting month. According to SupplyChainDive, the Port of Los Angeles has made strides to reduce the number of empty containers waiting in its docks, to address its busiest January on record. In addition to the decrease in average dwell time, the number of containers waiting on docks has seen a 75% drop from October 25th.