Ocean and air freight rates and trends; customs and trade industry news plus Covid-19 impacts for the week of August 9, 2022. 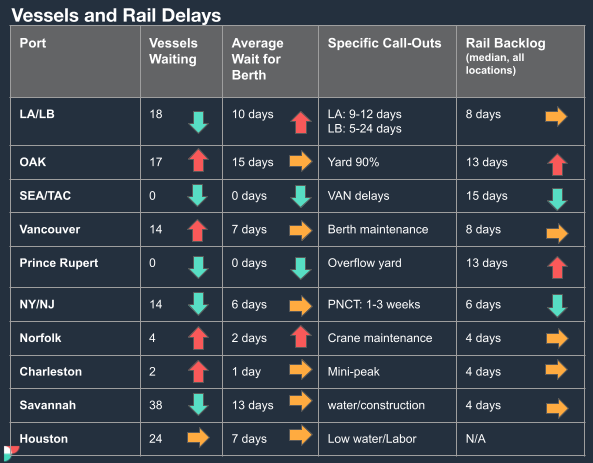 As of August 1, U.S. Customers and Border Patrol (CBP) has reopened the application process for new members to the Customs-Trade Partnership Against Terrorism (CTPAT) Trade Compliance program, which permits importers to assume responsibility for monitoring their own compliance in exchange for certain benefits. New applicants are required to satisfy the recently released minimum security criteria, including expanded compliance obligations around forced labor. Current CTPAT Trade Compliance members must implement the new forced labor requirements by August 1, 2023.

On August 4, the U.S. International Trade Commission (USITC) announced a new fact-finding investigation on the USMCA automotive rules of origin. The investigation will review the origin rules’ impact on the U.S. economy and U.S. automotive production and trade competitiveness, as well as the relevancy of the rules due to changing technologies. The USITC will hold a public hearing in connection with the investigation at 9:30 a.m. on November 3, 2022. Information about how to participate in the hearing will be posted on the Commission’s website no later than September 26, 2022 here.

FreightWaves reports that despite demand softening, spot rates have not plunged as deeply as expected. Right now the decline is gradual—with Transpacific rates steadying in July and early August. US import demand still remains above pre-Covid levels, causing congestion at several US ports.

According to The International Air Cargo Association (TIACA) director general Glyn Hughes, the air cargo industry is expected to face a number of upcoming challenges—as reported by The Loadstar. Despite the softening in volume, a combination of high fuel prices, staff shortages, lack of capacity, and closed airspace—results of sanctions against Russia—present critical issues for the air cargo industry.

The Biden administration may have limited opportunities and appetite to remove the tariffs, many supply chains may already be adapting to a tariffs-for-longer scenario.

Winter is Coming - Dealing with a Weak German Economy

This report reviews the key drivers of German industrial, consumer, and trade activity.

Also a reminder: the weekly economic report is now its own newsletter! You can sign up here to have these insights delivered directly to your inbox each week.