Ocean and air freight rates and trends for the week of January 3, 2018. 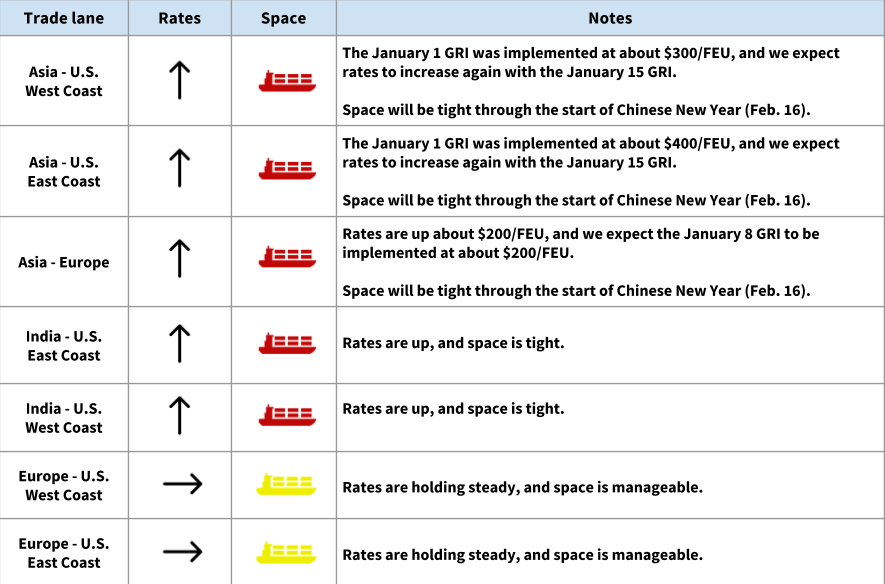 The January 1 GRI will hold

As Chinese New Year approaches, rates are up and space is tight

Because of increased demand, rates will stay up and space will be more difficult to secure -- both trends that will continue through the start of Chinese New Year. End-of-year blank sailings have led to cargo overflows, further tightening space this week.

For Europe - U.S. services, especially from the UK, winter weather is likely to cause delays. We’re also seeing equipment shortages in many inland locations due to high demand.

2018 is starting strong with high rates and space constraints

Final numbers are still being tallied, but it’s looking like 2017 was a record year for air freight. There’s plenty of momentum for air heading into 2018, thanks to steady demand for e-commerce products, service cancellations, and Chinese New Year.

What does this mean for you? We can expect rates to stay high, and space will remain difficult to secure in the coming weeks. Chinese New Year will maintain pressure on both rates and space, as importers rush to get their products out of China before February 16.

The ports of New York / New Jersey, Savannah, Charleston, and Norfolk announced closures on Wednesday, January 3 and Thursday, January 4, due to winter weather conditions. If your cargo is routing through either of these ports, you’ll probably see delays. These closures will impact operations for up to a week.

Big storms and extreme cold are forecast to hit the Midwest, East Coast, and Southern United States later this week. Thousands of flights have been canceled at EWR, BOS, LGA, ORD, and ATL.

Furthermore, this type of weather is always hard on trucking operations, as it causes mechanical, service, and capacity issues in impacted regions.

If you have cargo routing through any of these areas, keep an eye out for delays or rescheduled pickups.

As of January 1, 2018, U.S. Customs has increased the MPF. The new minimum and maximum are:

The percentage used to calculate the MPF will remain the same, at 0.3464%.