Ocean and air freight rates and trends for the week of January 10, 2018. 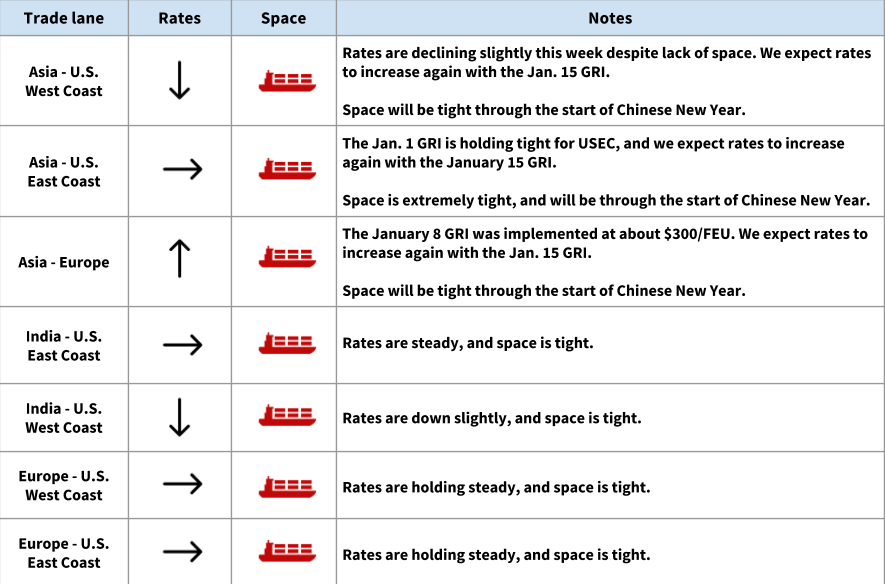 The January 1 GRI is holding for USEC, eroding slightly for USWC

The January 1 GRI was implemented at $400/FEU for Asia <> US East Coast, and it’s holding steady. Space is extremely tight to the USEC.

Despite the lack of space, rates are declining to the US West Coast. The January 1 GRI, which was implemented at $300/FEU, has slipped a bit this week.

Expect increases with the January 15 GRI

The January 15 GRI has been announced at $1,000/FEU. We will be monitoring the level of implementation closely.

Ex-Asia, supply and demand are in balance -- for now

There’s plenty of momentum for air heading into 2018, thanks to steady demand for e-commerce products and Chinese New Year. However, for now, rates are down slightly, and we aren’t seeing the severe space constraints that characterized the latter half of 2017.

We expect to see higher rates within the next week or two, as demand gets a boost from Chinese New Year (which begins on February 16 this year).

Space constraints out of New Delhi

We’re seeing high demand in New Delhi, and space is tighter than usual.

Many trucking companies in the Midwest and East Coast are still backed up from last week’s bout of severe weather. There will be more to come -- winter weather is always hard on trucking operations, as it causes mechanical, service, and capacity issues in impacted regions.

CN Rail delays in Canada and the US Midwest

If you have cargo routing through any of these areas, expect delays (your Flexport team will keep you posted).