Ocean and air freight rates and trends for the week of February 21, 2018. 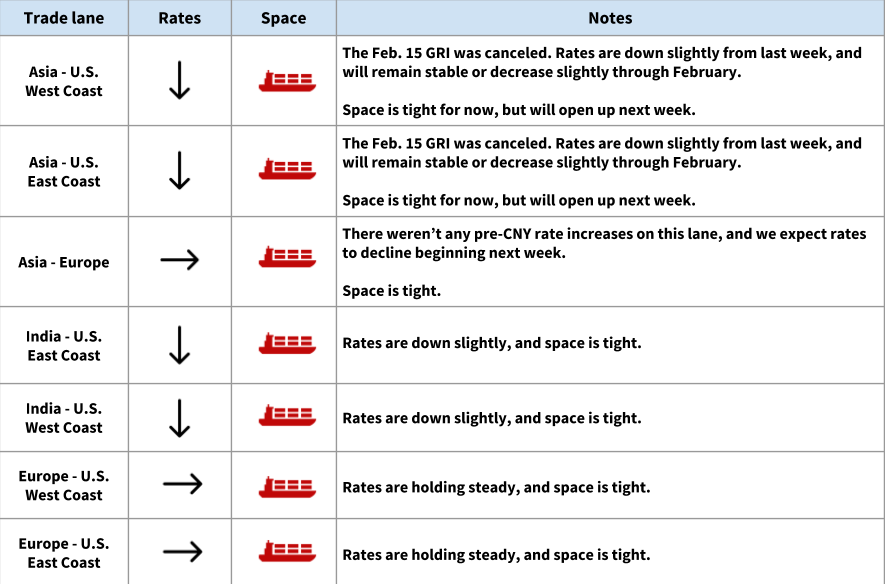 Rates to the U.S. are down slightly

The February 15 GRI was canceled, and rates from Asia to the U.S. are down slightly this week. We expect rates to remain stable or continue decreasing slightly over the next couple of weeks.

Space is tight but will open up next week

Space is tight this week, due to bookings and rollover from last week. After Chinese New Year, space will open up, and carriers will implement blank sailings in an attempt to more closely align supply and demand.

The market has calmed a bit for Chinese New Year

After a strong start to 2018, the air market is pretty well in balance for Chinese New Year. There are no major space constraints to note.

Air France strike will cause delays and cancellations

Air France employees are planning to strike on Thursday, Feb. 22. The airline is aiming to operate 75% of its flights, which will mean some cancellations and delays.

Trucking capacity shortage continues in the US and Canada

Import volume is up and ports are congested -- and, at the same time, capacity has been removed from the market due to the ELD mandate (which is also contributing to longer transit times). On top of that, there’s a significant driver shortage, and trucking companies are struggling with retention. Winter weather throws another wrench into the situation.

The U.S. House of Representatives passed a bill that would renew the Generalized System of Preferences (GSP) through 2020. Now it awaits the Senate.

The GSP is a U.S. trade program established in 1976, which expired on December 31, 2017. Since it expired, importers who had previously utilized the reduced duty program have been paying full duties on these items.

In past years, Congress has renewed the GSP program, but has done so after the expiration date, including a process for retroactive refunds of duty paid on GSP-qualifying goods. However, it’s not known whether or not the GSP will be renewed by the Senate, or that, if it is, retroactive refunds will be included.

The Coalition for GSP is tracking the situation on their website, where you can follow along with lobbying efforts and updates.