Ocean, trucking, and air freight rates and trends for the week of December 12, 2018. 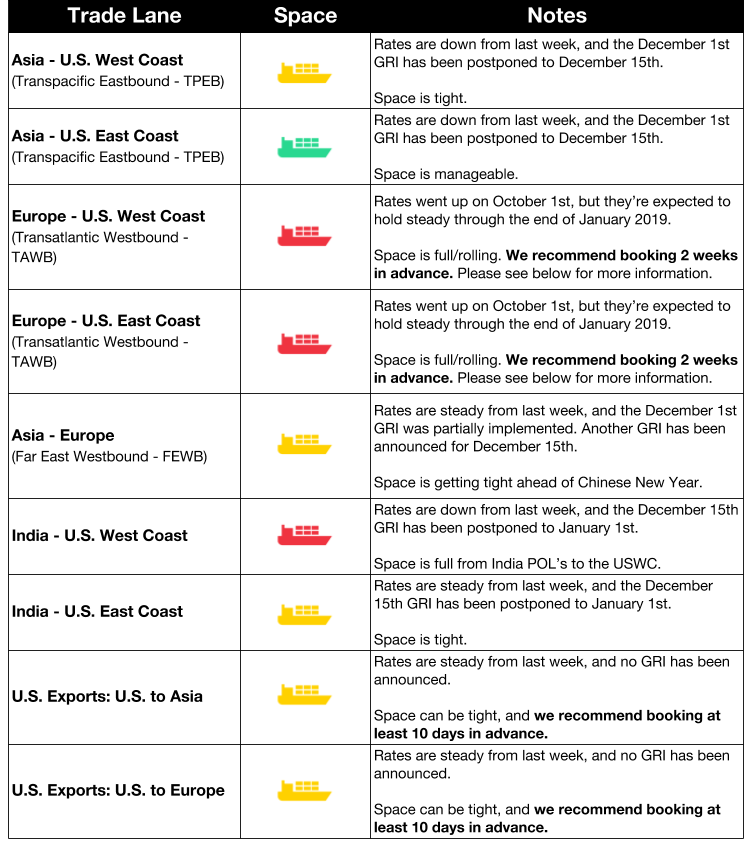 UK ports are very congested, which is causing tight trucking capacity and a decline in port productivity. The tight congestion is expected to continue through late January when Chinese New Year cargo will arrive. Water levels recently rose on the Rhine, increasing capacity and lowering rates, but water levels are expected to fall again in December.

The AE2/Swan Asia-North Europe loop was revived this week, so rates will not be raised as carriers had hoped. Chinese New Year is not expected to affect rates until late December, and even then rates may remain steady.

President Trump signed the FMC Authorization Act of 2017 into law this week, which will give the Federal Maritime Commission (FMC) more power to implement sterner regulations on shipping lines. The act addresses antitrust issues related to ocean alliances and consolidation in the industry.

FMC to Standardize Detention and Demurrage

The FMC released a report this week that investigated how carriers and container terminals apply detention and demurrage. The report established that these fees need to be standardized, in terms of how and when they are applied. No actions have been taken at this time, but the FMC received the recommendation to establish teams dedicated to transparency and standardization.

Port of Baltimore to Expand

A second 50-foot-deep berth will be built at Seagirt Marine Terminal, which will allow two ultra large container ships to be at port at the same time. The berth is expected to significantly increase Baltimore’s trade capacity.

ONE (Ocean Network Express) has announced a bunker surcharge to be implemented on January 1st, 2019 and applied to all contracts created in 2019. A Low Sulphur Fuel surcharge (LSF), $15 per TEU, will also be applied to all China exports via Shanghai, Ningbo, and Nanjing. Shippers are pushing back on the early implementation and size of the surcharge, but carriers argue the fee is necessary to budget for 2020. 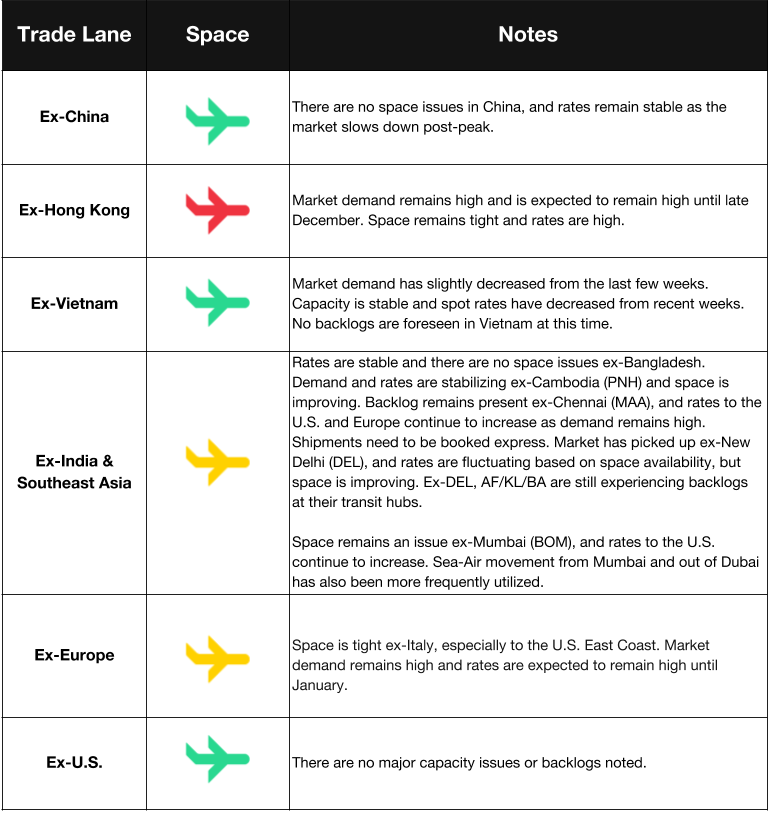 Both commercial and cargo planes are facing a pilot shortage as existing pilots reach the mandatory retirement age of 65. The qualification process for new pilots means that those going into retirement are not easily replaced, although both FedEx and UPS have started aviation programs to attract new students. Automated piloting may be the future of cargo planes if the shortage is long-term.

Indonesia’s Lion Air will add training for pilots that will simulate the flight-control issues experienced in a crash. The Allied Pilots Association, representing aviators for American Airlines, is also calling for more formal training, including simulations.

The Trump administration has been reviewing the U.S. Postal Service (USPS) and is proposing several changes to improve the institution's finances. Economic and internal structure changes have left USPS in a financial decline, so the administration is proposing changes like increased prices for Amazon deliveries, and granting mailbox access to third-party delivery businesses.

November manufacturing orders for heavy-duty trucks were at their lowest level in over a year. This slowdown indicates the end of an intense peak season for trucking as supply finally begins to meet demand.

J.B. Hunt added five electric box trucks to their fleet, which will be used for final mile delivery in the Santa Fe Springs, California, and Houston, Texas areas. UPS was the first company to start using this truck in the U.S.

Companies are stockpiling goods in the UK in anticipation of possible border disruptions after Brexit. Businesses have been advised to prepare for a worst-case scenario, and are storing goods like pharmaceuticals and groceries. As a result, available storage space is starting to run out.

The World Trade Organization has added two more countries to the dispute panels of the Section 232 steel and aluminum safeguard tariffs. Switzerland and India are now joining Canada, China, EU, Mexico, Norway, Russia, and Turkey, all of whom have stated the tariffs have no basis. The U.S. is arguing that the safeguards are necessary, and the U.S. has the right to determine what its national security interests are.

Modems Still Subject to 301 Tariffs Even After NAFTA Eligibility Confirmed

CBP recently ruled that modem parts assembled and programmed in Mexico can be marked as Mexican origin and do qualify for NAFTA, ruling that "substantial transformation" doesn't occur.

The International Trade Commission (ITC), World Trade Organization (WTO), and World Customs Organization (WCO) created a tool to help importers determine if their product is eligible for one of the over 400 preferential trade agreements currently in place. The Rules of Origin Facilitator only requires three things: Export from, Import to, and the first 8 digits of the HTS code. The tool also links to the origin rules and requirements directly from the country's websites.

CBP has completed analysis on blockchain testing involving the transmission of NAFTA and CAFTA certificates of origin, and are going to release results publically after the Commercial Customs Operations Advisory Committee (COAC) has reviewed and provided recommendations. CBP is also planning to review IPR licensing in an effort to reduce IPR theft by 3D-examining the licensed product through virtual reality, comparing it with the imported products’ likeness.