Ocean and air freight rates and trends; trucking and customs news for the week of January 30, 2019.

Rail movement in the Midwest and Canada is delayed as temperatures drop. Railcars are shortened and trains are slowed in an effort to not ruin the tracks or brakes when the temperature falls below -25℃. This causes longer transit times, idling rail cars, and congestion at ocean ports because containers can't be loaded onto the rail. For more information, see CN's video on cold rail conditions. 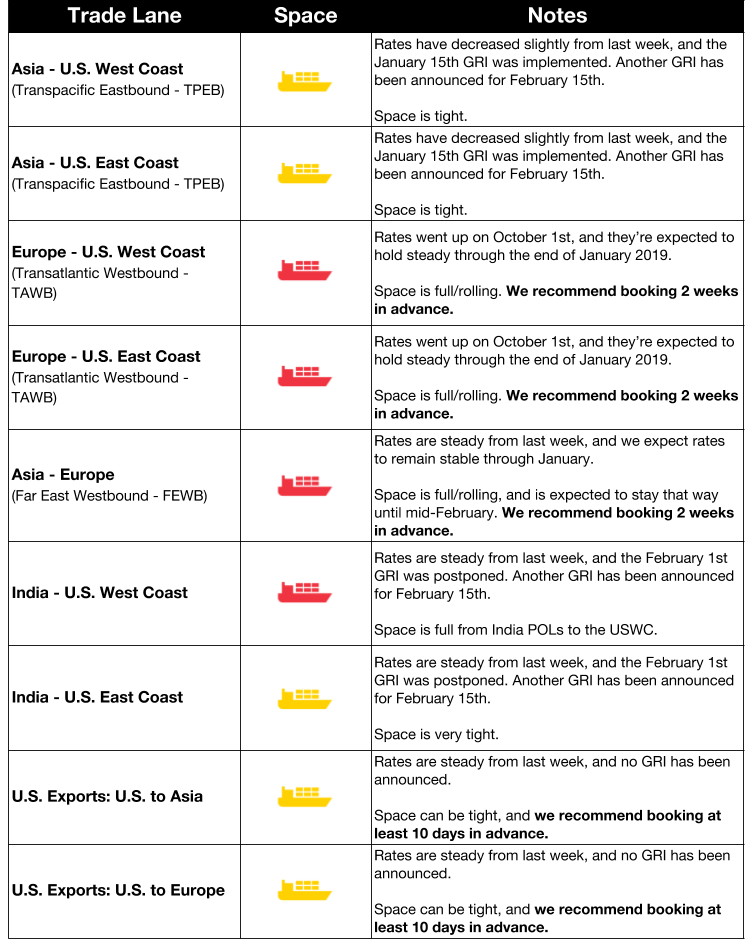 A number of blank sailings have been announced around Chinese New Year. More information and a list of the affected ports and strings is available on our blog.

A teacher protest has closed off the railroad lines between Manzanillo and Lazaro Cardenas, Mexico’s two largest Pacific Coast ports and brought 172 trains to a standstill. Over 8,000 containers are trapped at terminals, cutting off supply of raw materials and parts. The protest began on January 14th, and if there isn’t a resolution soon, manufacturers, especially auto makers, may shut down.

A $67M two-year expansion to TraPac, a terminal operator in the Port of Oakland, has been completed, which doubled its size from 66 to 123 acres. The expansion will allow the port to handle more containers and accommodate mega ships which are expected to keep increasing in size. Trapac moves about 15% of the cargo that travels through the Port of Oakland.

Shipping line and multimodal operator Samskip will charge a “Pre-Brexit Peak Volume Surcharge” in preparation for the increased congestion and low capacity anticipated pre-Brexit. The surcharge pays for the contingency plans that Samskip put into place in advance of the expected increase in demand.

Carriers are planning to add 10% more capacity to the Asia-North Europe trade lane in March by adding a new loop and increasing vessel sizes. The decision has been met with some skepticism, since added capacity will further drive down post-Chinese New Year rates. 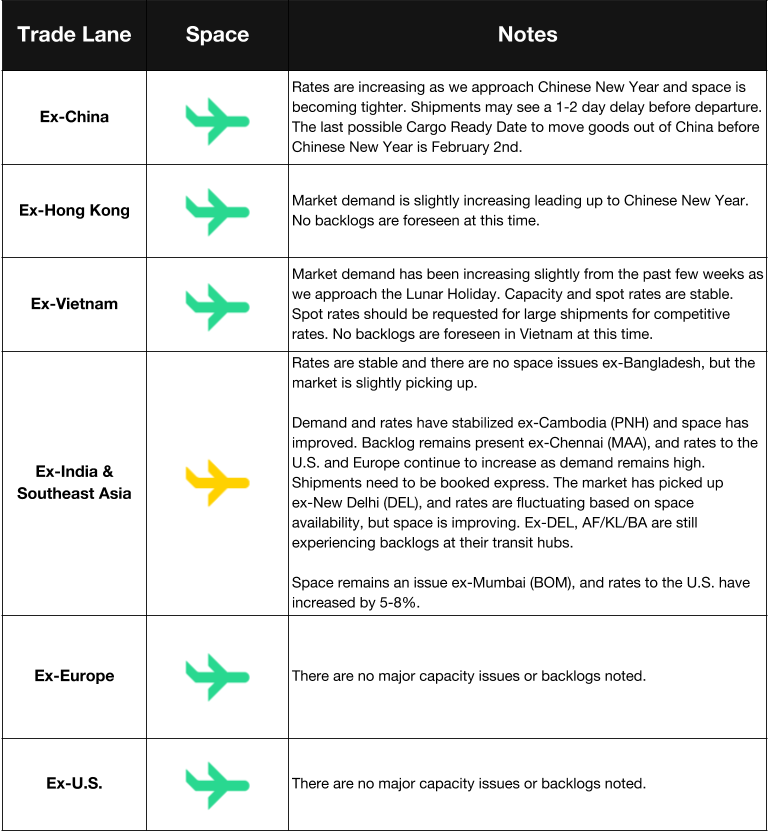 Government Shutdown Will Have Lasting Effects

The partial government shutdown may have finally been put on pause after 35 days, but that doesn’t mean the air market will return to normal. The lack of paychecks put stress on air traffic controllers, which has resulted in more errors made on the job, and threatens an increased rate in retirement. The shutdown also impacted training for new air traffic controllers, putting the field at risk for underemployment.

Amazon Shipping, Amazon’s small parcel delivery service, plans on poaching customers from UPS and FedEx by promising they won’t charge any fuel surcharges or extra fees. These additional charges from UPS and FedEx can add up and are often a source of complaint for shippers. Amazon Shipping, however, is designed to deliver to homes, not businesses, so residential delivery charges are taken into account in their initial rates.

DB Cargo and Maritime Transport are jointly launching a new intermodal product, Maritime Intermodal, in the UK which will initially offer four services from Felixstowe and Southampton. 32 million road miles are anticipated to be removed from the UK network as a result, reducing road congestion and greenhouse gas emissions.

A labor dispute between the International Longshoremen’s Association and the Steamship Trade Association have been affecting port operations and closed the terminal to trucks for two hours last week. Drivers have reported seven hour wait times, although the director of communications for the Maryland Port Administration has said the demonstration is not preventing trucks from entering the terminal.

The U.S. House of Representatives and the U.S. Senate recently proposed two separate pieces of legislation that outlined different versions of authority granted to the White House in relation to increasing or decreasing import tariffs. Sean Duffy introduced HR 764 on January 24th which would essentially grant President Trump the power to reduce or raise tariffs based on negotiations or reciprocal measures imposed on the U.S. The other bill, HR 723, introduced on January 23rd, would require an approval vote from Congress if President Trump wanted to implement any tariffs for longer than 90 days.

Executive Director of Trade Policy and Programs, John Leonard, announced that CBP has fixed a bug in ACE that was preventing section 301 tariff drawback claims from being processed. The government shutdown did not stop CBP from phasing out the old “core” drawback process on February 24th, so claimants will need to file under the TFTEA process after February 24th. Core claims will be rejected after that date.

Elise Shibles of Sandler, Travis & Rosenberg urged apparel importers to use caution when importing their clothing on hangers. Plastic hangers typically fall under HTS 3923.90.0080, and currently carry a 13% (3% + 10% section 301) tariff rate with the expectation that it will increase to 28% on March 2nd. Some importers have decided to import the hangers with the garments as a packaging material to mitigate the tariff cost. However, importers need to be careful when changing their product declaration, and make sure that they clarify the difference between these hangers and previously imported hangers.

CBP’s deadline to submit comments for the 21st Century Customs Framework is February 4th. A public meeting will be held on March 1st as CBP seeks to update and enhance areas of the agency, including intelligent enforcement, technology, data access and sharing, processes, and infrastructure. If you wish to attend the meeting in person or by teleconference, register by the February 4th deadline.

For a roundup of tariff-related news, subscribe to our Tariff Insider_. _