Ocean and air freight rates and trends; trucking and customs news for the week of February 20, 2019.

Congestion at the ports of Los Angeles/Long Beach has eased up some after Chinese New Year, but delays are still longer than usual. New York and New Jersey ports are still heavily congested, which is expected to be made worse by severe winter weather.

UK ports are very congested, which is causing tight trucking capacity and a decline in port productivity. Quay side operations have improved, but a shortage of haulage capacity restricts movement.

Haulage capacity in Germany and the Benelux also remains a challenge, impacted by low water in the river Rhine, reducing intake of barges and increasing moves via rail and truck. 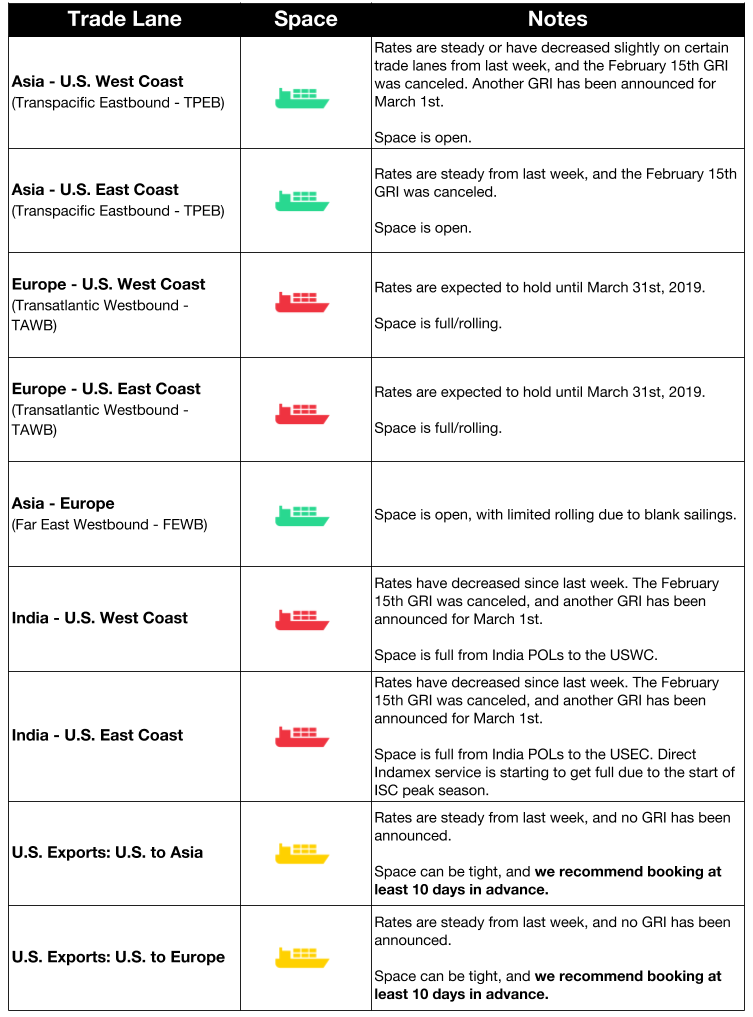 A number of blank sailings have been announced surrounding Chinese New Year. More information and a list of the affected ports and strings is available on our blog.

Pending the success of the ongoing pilot program, DHL Express will roll out a Thames barge system sometime this year. These barges would move documents and small packages down the Thames river, reducing congestion and pollution on UK roadways.

Georgia Ports Authority (GPA) announced their expansion program for the port of Savannah this week, outlining growth plans. The port is to be able to handle six 14,000 TEU ships simultaneously by 2024, with 37 ship-to-shore cranes in operation. By 2028, capacity is expected to have increased from 5.5M TEU to 8M.

The appropriations bill for 2019’s fiscal year, signed into law by President Trump last week, provides almost $300M to coastal ports as part of the Port Infrastructure Grant Program. The top 15 container ports in the U.S. will receive “special treatment,” three of those ports being Florida’s Jacksonville, Fort Lauderdale, and Miami ports.

Maersk announced this week that it has made a deal with PBF Logistics to supply its US east coast vessels with low-sulfur fuel oil (LSFO). This deal prepares for the possibility of a shortage of IMO 2020-compliant fuel. 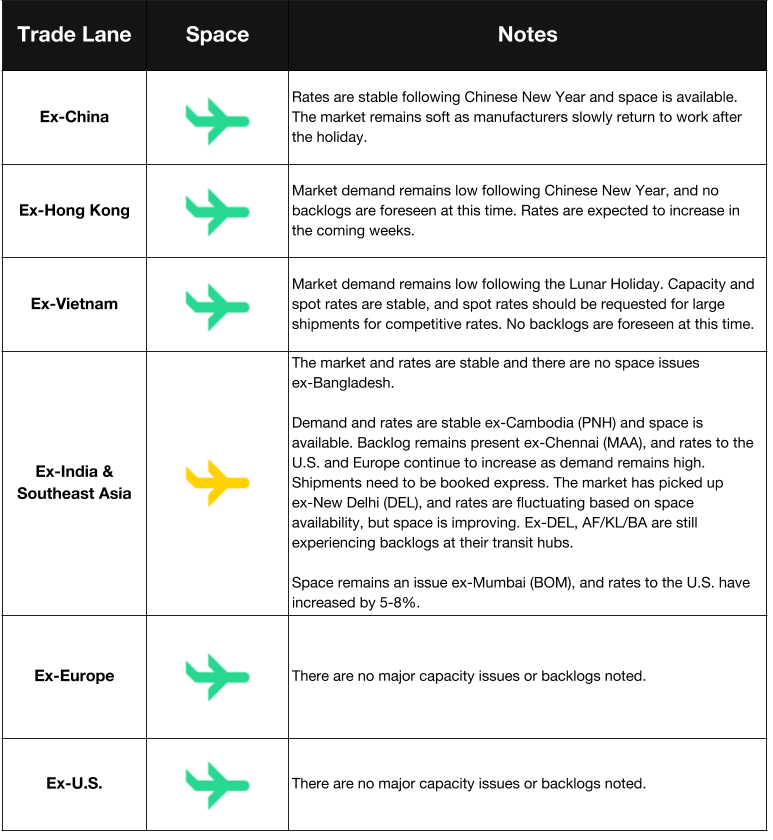 The Transportation Security Administration (TSA) approved teams from three private canine screening firms to begin screening measures at airports around the U.S. Canine screening of air cargo has proved to be faster and more accurate than other screening technologies, and doesn’t require air pallets to be broken down.

The European Commission approved Air France-KLM, Delta, and the Virgin Group’s joint control over Virgin Atlantic. The Commission determined that the acquisition would not be anti-competitive because the three are not close competitors, and plenty of other strong competition will still exist on the affected routes.

The European Union agreed to a compromise that would reduce carbon dioxide emissions from new trucks and buses by 30% by 2030. There is currently no limit on heavy-duty vehicle emissions, although trucks make up 25% of the EU’s transport-related emissions.

GSP Eligibility for India Under Review

The United States Trade Representative (USTR) has extensively reviewed India’s continued eligibility with the Generalized System of Preferences (GSP). There is a strong possibility that some or all products could be removed, suspended, or graduated from the trade program, because India may no longer require tariff benefits. A final decision will likely be made in March. The USTR is also evaluating the continuation of the GSP program in Thailand, Indonesia, and Kazakhstan.

The exclusion process for the first two lists of the section 301 tariffs has already been laid out, and some exemptions granted. It was announced on January 11th that no exemptions would be made for the third list, but with the unlikelihood that the U.S. and China will agree on a trade deal by March 1st, this has changed. On February 15th Congress directed the USTR to establish an exclusion process by March 17th for the list 3 goods that have affected most importers. This process will likely be similar to the process for the first two lists.

As the voting for the United States-Mexico-Canada Agreement ratification approaches, trade compliance professionals want to know what changes they can expect. As currently constructed, the majority of the fundamental concepts will remain: rules of origin, tariff shift, regional value content, net costs, transaction value, indirect materials, and de-minimis. However, importers will need to re-review their products as many of the product-specific rules in the HTSUS note 12(t) will be revised, especially in the automotive section. You can find a list of all the proposed changes on the USTR’s website.

For a roundup of tariff-related news, read to our Tariff Insider_. _