Ocean, trucking, and air freight rates and trends for the week of December 19, 2018. 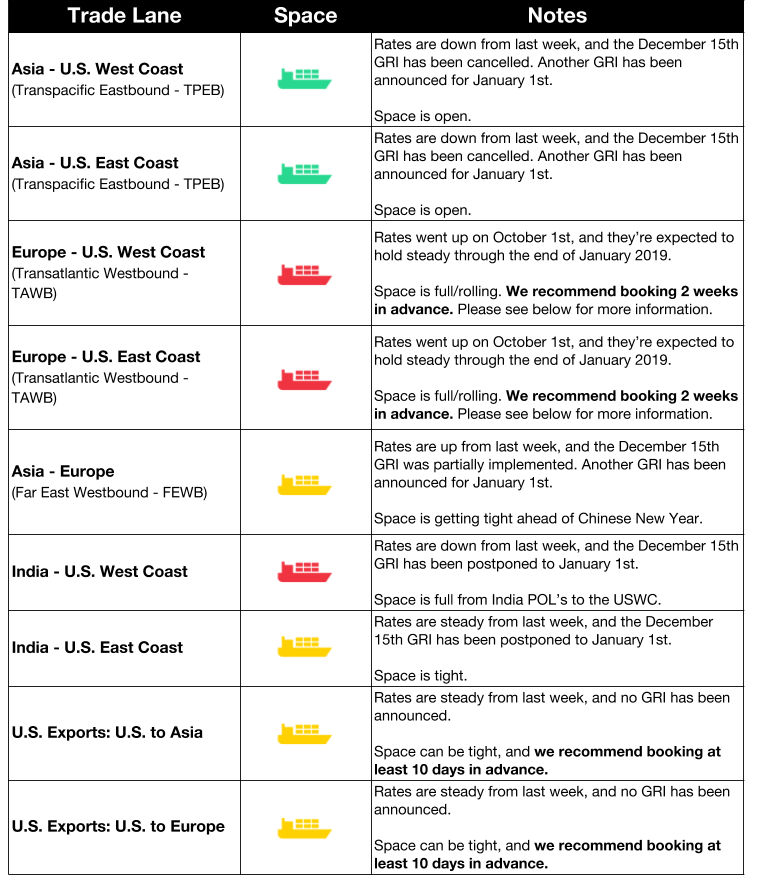 UK ports are very congested, which is causing tight trucking capacity and a decline in port productivity. The tight congestion is expected to continue through late January when Chinese New Year cargo will arrive. Water levels recently rose on the Rhine, increasing capacity and lowering rates, but water levels are expected to fall again in December.

Service to Return to Felixstowe

Hapag-LLoyd has announced that the European Mediterranean Express service will return to Felixstowe on December 23rd. Carriers had transferred calls from the UK port to other ports like Southampton, London Gateway, and Liverpool after Felixstowe began suffering severe delays following the collapse of their new terminal system in June. The switch from Felixstowe, in conjunction with peak season, contributed significantly to overall UK port congestion, but services are beginning to return.

Port of Charleston to Get Four New Cranes

The Port of Charleston will have four new cranes by the end of 2020, which will allow the port to serve three large vessels at the same time. The port has seen a record influx of cargo in the last few months as importers scrambled to get their goods into the U.S. before the 2019 tariffs, and this terminal expansion will help accommodate more high volume in the future.

THE Alliance to Improve Asia-Europe Service

THE Alliance has announced that a new service network will begin after Chinese New Year in 2019 and will replace the FE1 Asia-North Europe loop and the PS1 and PS2 Asia-US west coast services. The revamped Asia-Europe service is intended to increase capacity and service quality.

The 2M alliance will add six more ultra large container vessels to its 10 Asia-Europe strings and drop eight port of callings starting in March of 2019. The changes are intended to improve schedule reliability, although the alliance noted that vessels are still subject to delays with the extreme port congestion some terminals (like Felixstowe) are experiencing. The trade lane’s capacity will not increase, because of anticipated further slow steaming related to IMO 2020 (see below).

Vessels with scrubbers installed now account for 10% of global vessels, and 40% of new vessels are being built with fuel refineries onboard. 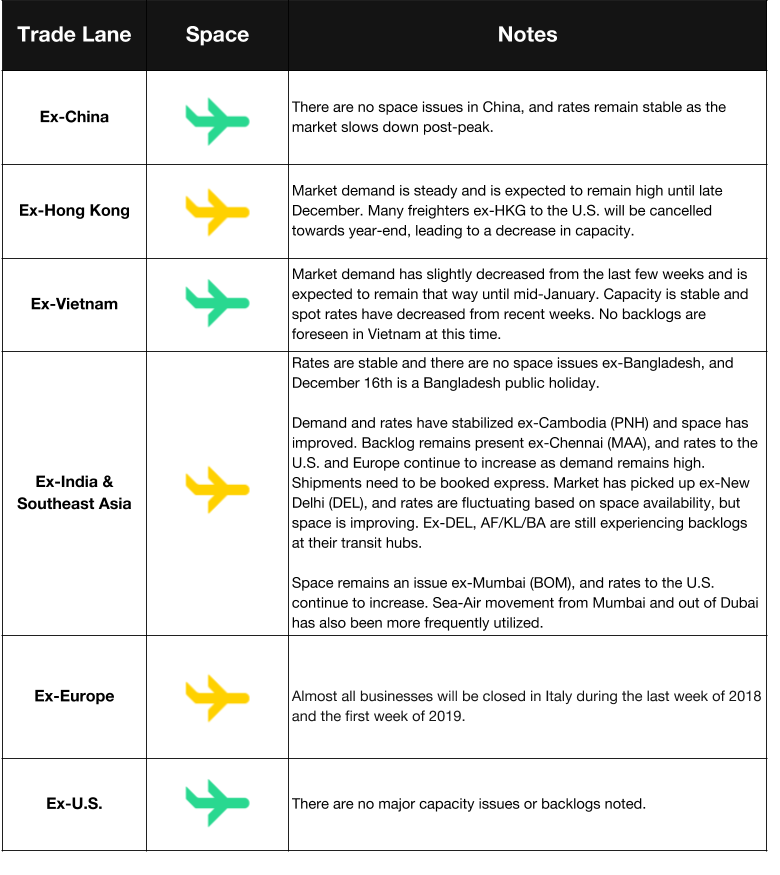 **Air Market Uncertainty Ahead of Brexit **

Experts are skeptical whether UK airports have the infrastructure to cope with Brexit if the UK leaves the European Union in March without a trade deal in place. An aviation deal may be in place to allow flights between the UK and the EU in the event of a no-deal Brexit, but reports say that it hasn’t passed through the European Council, and that this deal would only last through 2019.

ULDs to Have Bluetooth-Connected Devices

AirBridgeCargo has announced that they will start using Unilode’s Internet of Things-connected ULDs. These devices will be mounted to ULDs, and are able to register environmental factors like temperature and humidity, as well as give the carrier information on the cargo’s status and location.

Germany to Incentivize Rail over Road

From 2018 to 2023, rail freight operators will be compensated up to 45% of their track access charges and will pass those cost savings onto the customer to make rail costs more competitive with trucking. The program will reduce CO2 emissions as well as help decrease road congestion.

FedEx is going to start offering later pickup hours now during peak season, and is planning on keeping these expanded hours in 2019. Service will also be increased to six days a week in 2019, to keep up with the demand that FedEx says will continue to increase past peak season.

Companies are stockpiling goods in the UK in anticipation of possible border disruptions after Brexit. A trade deal may not be negotiated before the UK’s planned exit from the European Union in March, so businesses are putting together stock and import plans to avoid a shutdown.

On December 14th the USTR formally advised that the third tranche of tariffs on on $200 billion worth of Chinese goods wouldn't be raised from 10% to 25% until March 2nd, instead of the originally planned January 1st hike. Many feared that since there hadn't been an official release and ACE was still programmed for the increase on January 1st that the increase may actually happen on the first of the year. Importers can breathe easy for a little longer as the official USTR release was posted on their website.

It's been nearly 3 years of delays and confusion for those waiting on the finalization of the most complex customs program, duty drawback. For the first time since 1992, CBP has issued a new final process for claiming drawback that aims to modernize it. There have been many comments and issues brought up throughout the changeover period (this past year), and there is still continuing pushback on some of the changes including some CIT litigation on issues like reporting fields, excise taxes, and mixed claims. The main concern for many who filed under the new TFTEA process, which was available starting on February 24, 2018, is that the claimant didn't know how they would be refunded the duties and fees as nothing was in place for the accelerated payment (the preferred method of receiving the refunds). Many were continuing to file under the old process (Core Drawback) as it is allowed until the full switch becomes mandatory at the end of this year. Now claimants can breathe easy knowing that they will be paid on their TFTEA drawback filings. With a final rule is in place, CBP also released a CSMS message informing the claimants that filed TFTEA drawback during the past year informing them how they need to re-submit their claim to receive the accelerated payments.

Temporary Reduction of Tariffs in China of U.S. Cars

China has followed through on an agreement made with the U.S. during the G20 meetings in Buenos Aires. They will lower their tariffs on U.S. cars from 40% to 15% in a temporary truce during ongoing negotiations, which will be in effect from January 1st through March 31st. The tariffs were originally raised as a response to the safeguard tariffs the U.S. imposed on China, and many are hoping this is a sign the tensions are moving in the right direction.

Eric Baird, a former CEO of USA Shipping, LLC (a consolidation and shipping service) was fined a record $17 million for his exporting crimes and handed a 5-year denial of export privileges. The scheme involved purchasing US goods for foreign customers and improperly claiming what the items were and what the value of those goods were during export to the foreign buyer. The foreign buyer would purchase the US made goods from Baird's company, then purchase the goods and have them sent to either himself or his employees' home addresses in the U.S. They would then re-export them under fabricated values and/or descriptions clearly committing fraud violations on their export declarations.