Ocean, trucking, and air freight rates and trends for the week of December 5, 2018 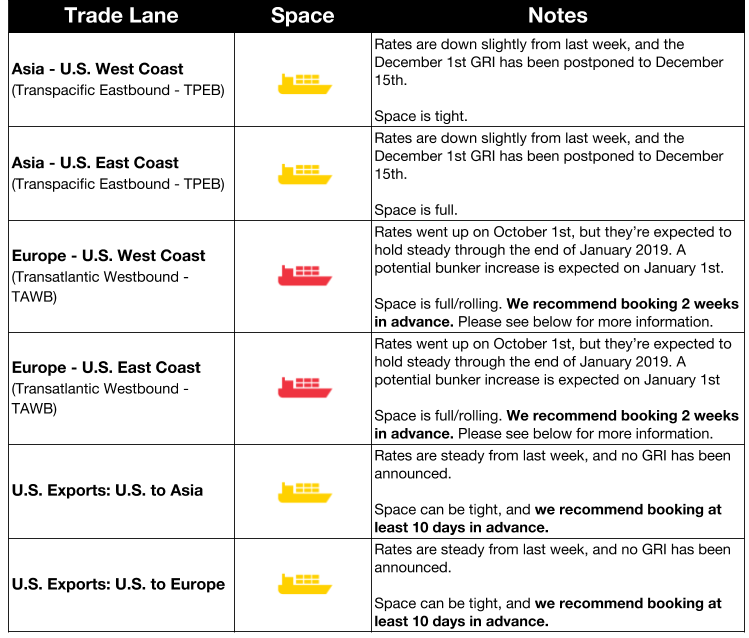 ONE to Implement Recovery Strategy

After Ocean Network Express (ONE) launched in April, the carrier group suffered a loss of business related to a lack of staff, and a lack of familiarity with the systems and data. Going forward, ONE plans to restructure parts of the business including cargo portfolio and product optimization, and to improve detention and demurrage collection.

Rates on the Asia-to-U.S. trade lane began to fall this week as we approach January 1st, 2019. The rise in import volume and subsequent rise in rates was attributed to front-loading as shippers tried to import goods before the increase in tariffs, but that import volume is slowing down.

The January 1st, 2019, tariffs have also been postponed, as reported in the Tariff Insider.

MSC has announced that they will introduce a bunker surcharge at the beginning of next year, to pass on the estimated $2 billion in additional fuel costs that will result from the 2020 regulations.

Feeder vessels are set to benefit from these regulations, as larger vessels are temporarily put out of commission while scrubbers are installed.

For an in-depth look at the regulation and how to prepare, read our blog post: IMO 2020: What Shippers Need to Know Now. 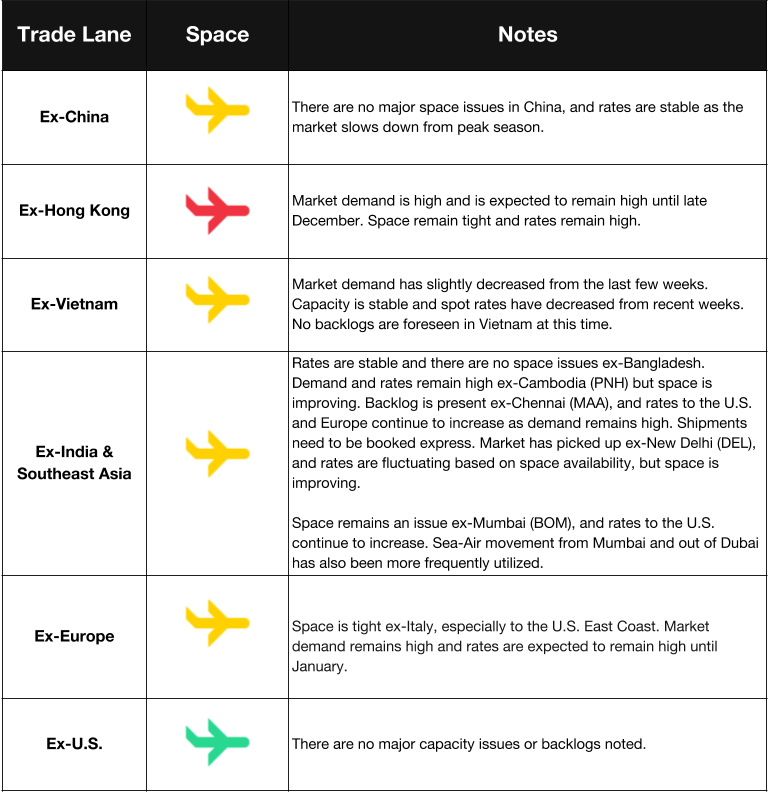 Bangladesh Exports to be Shipped via India

We’re likely to see an increase in trucking leasing instead of purchasing in the future. Purchasing trucking equipment is no longer as beneficial because the depreciation deduction was reduced to 21% from 35% in the Tax Cuts and Jobs Act of 2017, and new Financial Accounting Standards will increase the value of a leased asset.

President Trump and President Xi Jinping met on December 1st to discuss trade for the first time since trade tensions began between the two countries, and the aluminum and steel tariffs were first implemented. They agreed on a truce, and any possibility of future increases is postponed until March 1st, 2019.

For more information on this and other trade war news, check out our weekly blog series, Tariff Insider_. _

The United States Mexico Canada Agreement (USMCA) was signed by each country’s president on November 30th, but still needs to be passed through the legislative bodies of each country for final approval. The Section 232 (steel and aluminum) tariffs must also be removed before Mexico or Canada will ratify the deal, and the agreement may not be passed through the Democratic majority of Congress. President Trump has also said he would repeal the North American Free Trade Agreement (NAFTA), which if possible would mean that the country return to a pre-NAFTA state.

U.S. Customs and Border Protection is heavily monitoring and auditing for any changes where an HTS code subject to the Section 301 tariffs changes from a country of origin of China to another country not subject to those tariffs. CBP is using the CEE’s (Centers of Excellence and Expertise) to test different importers within similar industries. Importers need to keep detailed records for any changes they make to their country of origin determination, because CBP will examine origin changes even after the tariffs are lifted.