Ocean and air freight rates and trends; trucking and customs news for the week of February 27, 2019.

Congestion at the ports of Los Angeles/Long Beach has eased up some after Chinese New Year, but delays are still longer than usual. New York and New Jersey ports are still heavily congested, which is expected to be made worse by severe winter weather.

UK ports are very congested, which is causing tight trucking capacity and a decline in port productivity. Quay side operations have improved, but a shortage of haulage capacity restricts movement.

Haulage capacity in Germany and the Benelux also remains a challenge, impacted by low water in the river Rhine, reducing intake of barges and increasing moves via rail and truck. 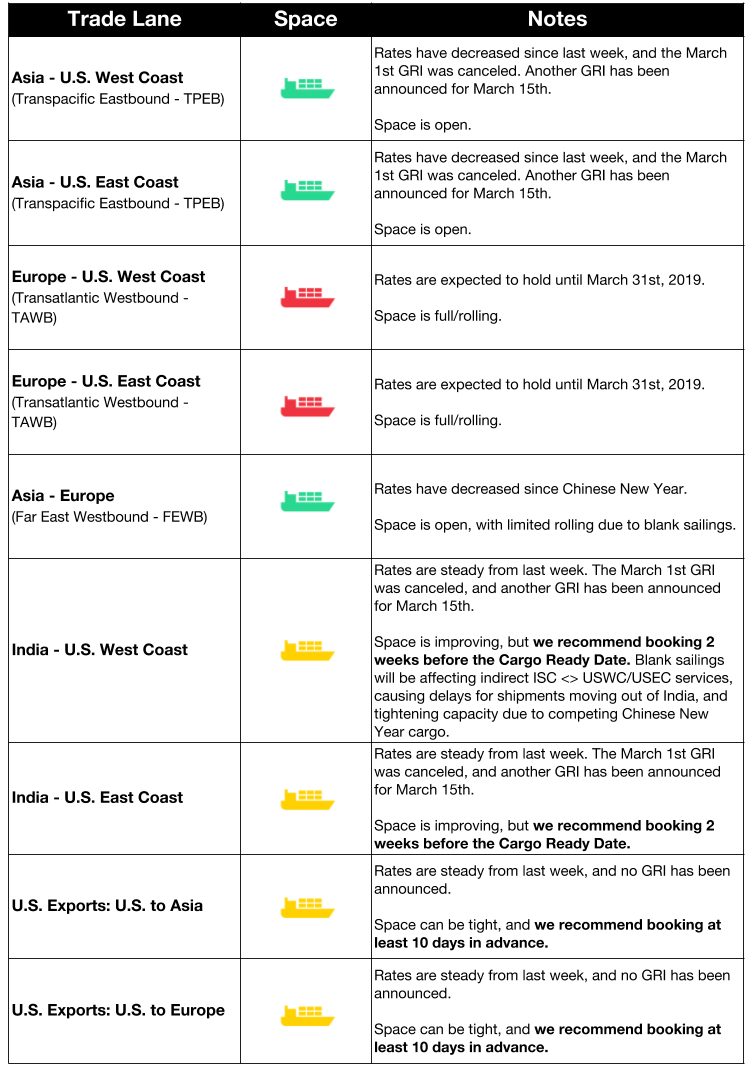 A number of blank sailings have been announced surrounding Chinese New Year. More information and a list of the affected ports and strings is available on our blog.

**Port of Oakland to Expand **

The Port of Oakland is planning on accommodating more mega-container vessels in the future, and is adding three more cranes in late 2019 in preparation. When ports can expect to start seeing these large vessels is not yet determined, but ports are anticipating seeing these vessels start to dock in 2-3 years.

Port of Tilbury to Build Terminal

The UK’s port of Tilbury will build a multi-million pound terminal across its current site on the Thames. The new terminal will increase capacity and is expected to double cargo volume over the next 10-15 years. 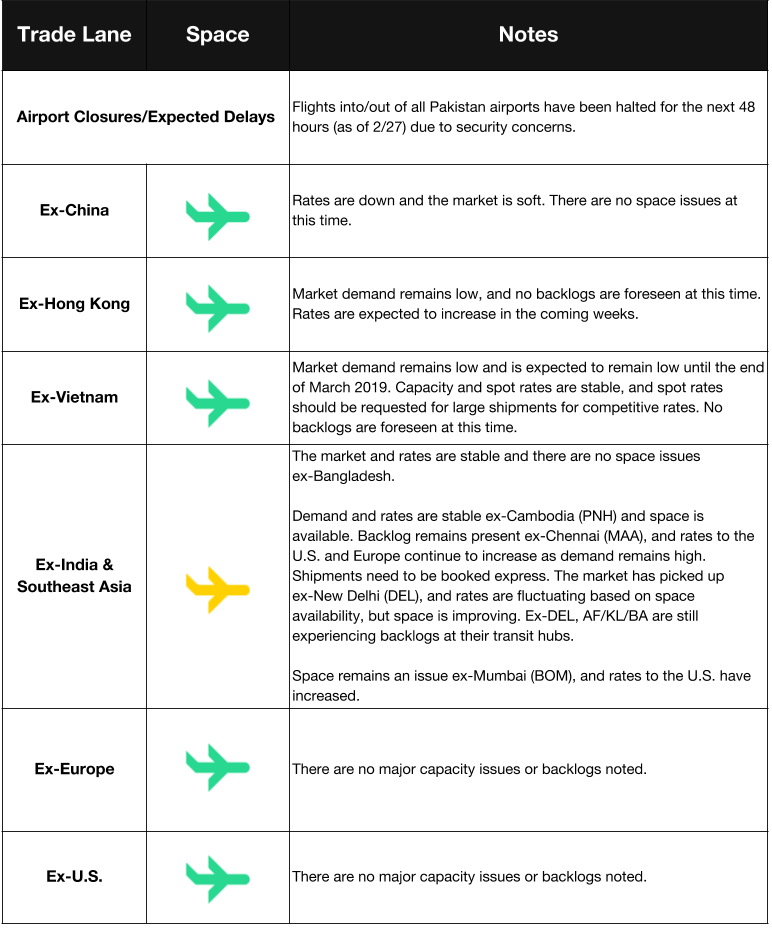 The private air sector has set up contingency plans in the event of a no-deal Brexit and will offer air services in case the the trucking industry across the English Channel is disrupted. Capacity overall is being ramped in preparation of Brexit.

Pakistan has closed its air space following tensions with India, causing Emirate and Qatar Airways to suspend flights beginning on February 27. Flights that fly between Pakistan and India have been forced to a temporarily reroute.

The Irish haulage industry is planning to seek support from the Irish and European Union governments if Brexit causes delays and damages to the industry. Post-Brexit customs procedures will likely cause delays at the border, and the industry expects compensation for the associated business losses.

The Commercial Customs Operations Advisory Committee (COAC) released a document on some of the blockchain testings they've performed on NAFTA and Central America-Dominican Republic Free Trade Agreement (CAFTA) entries. The tests, done by DHS and CBP along with CBP auditors, import and entry specialists, CBP legal and policy personnel, importers, technology companies, and suppliers tested the feasibility of the certificate of origin transfers. The results were very positive as blockchain technology is a much more efficient and expedited process. The next testing scheduled will facilitate the tracking of IPR rights in late 2019.

The Food and Drug Administration released a statement on the plans and strategies to modernize the tools to ensure food safety on imported products. It isn’t creating new rules, just updating and finding better ways to implement the ones it already has in place. The FDA wants to put a strong emphasis on the Foreign Supplier Verification Program (FSVP) by using the data it has to implement more safeguards through defining risks based more on analysis than happenstance. It also wants to improve screening equipment and testing systems to make them less labor-intensive.

For a roundup of tariff-related news, read to our Tariff Insider.