Ocean and air freight rates and trends for the week of January 17, 2018. 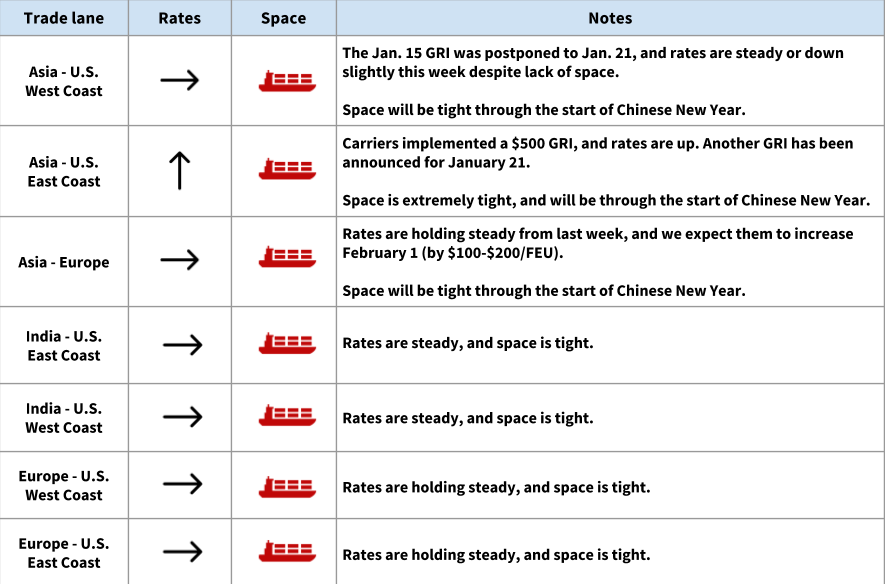 Carriers implemented a January 15 GRI of $500/TEU for Asia <> U.S. East Coast. Another GRI has been announced for January 21.

For Asia <> U.S. West Coast, carriers postponed the January 15 GRI to January 21. We expect this to be partially implemented.

Space will be constrained through Chinese New Year

The calm before the Chinese New Year storm

For now, supply and demand are in balance for cargo ex-Asia -- but we expect rates to rise, and space to become more constrained, as we approach Chinese New Year.

Ports in the mid-Atlantic and southeast are being impacted by a combination of weather conditions, vessel delays, port congestion, and significant import volumes. This is affecting the ports of Savannah, Norfolk, Charleston, Memphis, Nashville, and Jacksonville.

Note: The Port of Houston, after being closed on January 17, has announced that it will extend free time by two days.

If you have cargo routing through any of these ports this week or next, you can expect delays and, potentially, related fees such as trucking wait fees.

Trucking rates are up due to weather and the ELD mandate

Trucking capacity is tight in many regions, which is typical for this time of year. Currently, rates and capacity are also impacted by winter weather and the recently implemented ELD mandate.