Recent news and updates related to the ocean and air freight market for the month of July 2017.

We publish a market update at the beginning of every month, and refresh rate predictions every week. Subscribe to these updates here! 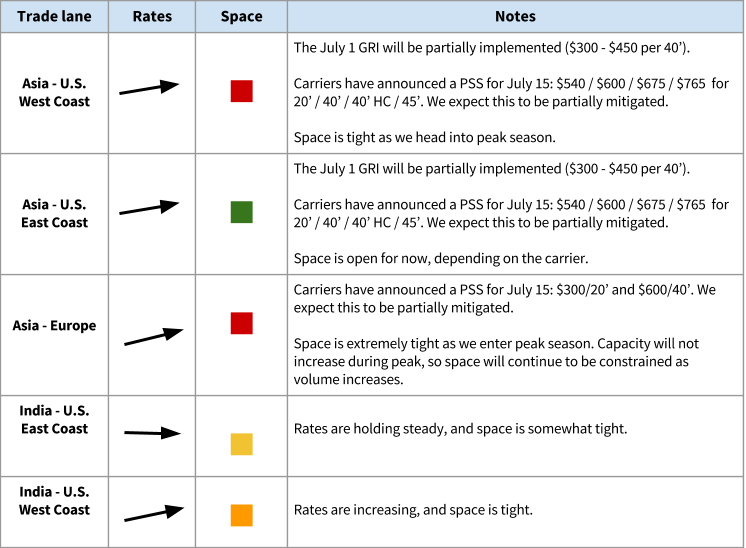 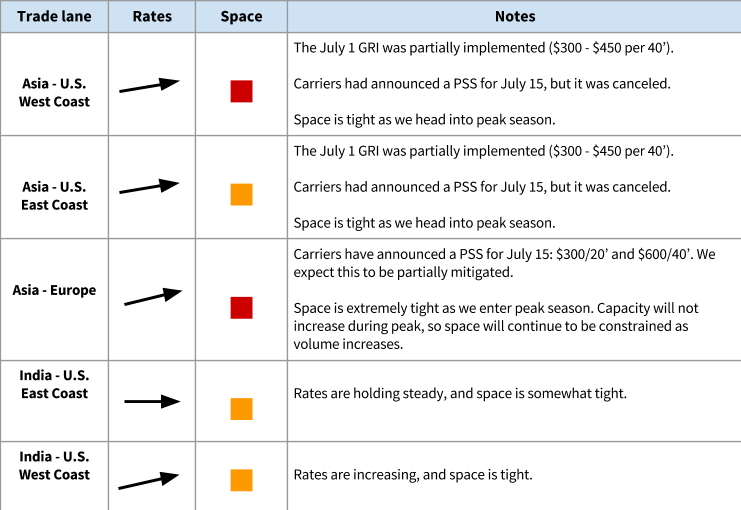 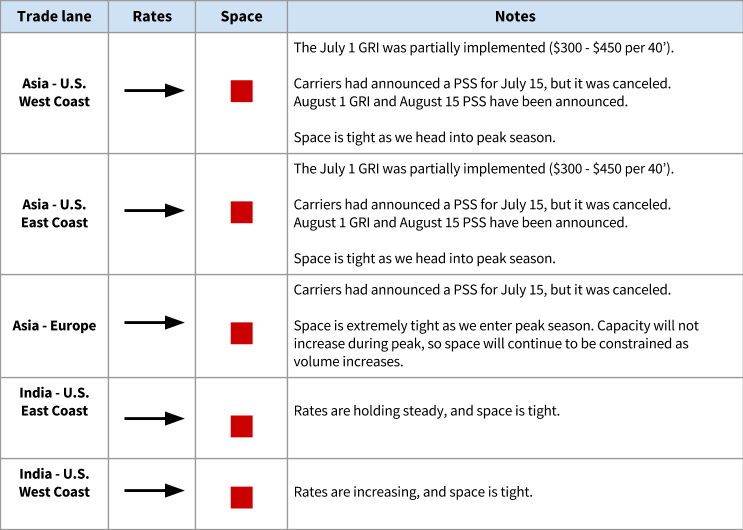 We’re heading into peak season, which will tighten capacity and drive rates upward. Carriers had announced a Peak Season Surcharge (PSS) for July 15, but it was canceled.

Space will become tighter, especially from Asia - Europe. Book your shipments as far in advance as possible!

The impact of the Petya cyber attack

We’ll see some lingering fallout from the June 27 “Petya” cyber attack. Because the attack affected both bookings with Maersk and APM terminals, we may see any combination of the following in July:

The Chinese government–owned shipping line COSCO has announced plans to buy OOCL. The deal is still subject to regulatory approval, but if approved, this merger will continue a larger industry trend of consolidation, which we’ll see more of in the months and years to come.

Both COSCO and OOCL have a lot of container capacity on order (more than 600,000 TEU combined), and with this acquisition, it’s clear that COSCO is angling to become the largest carrier in the world.

The two shipping lines are in the same alliance (The Ocean Alliance), which should make for a smooth transition with minimal service disruptions. They also use the same IT systems, which will make technical integrations easier.

No slack season for air cargo this year

The air freight market, especially from Asia to North America, is the strongest it has been in the last 6-7 years. This is largely driven by:

Demand for international air cargo continues to grow more quickly than capacity, continuing a supply-demand imbalance that began in Q4 of 2016 and has accelerated in 2017. This is most severe in the Asia-Pacific region, which saw 9.4% demand growth but only 3.3% growth in capacity.

Delays and extra fees in advance of Amazon Prime Day

We’ve been seeing large increases in the amount of goods being sent to Amazon FBA warehouses in advance of Amazon Prime Day (July 11, 2017).

If you’re shipping to Amazon, you can expect delays and, potentially, extra fees, as warehouses work to keep up with the volume. Read more about the impact here.

On July 5, in observance of the 1934 West Coast Waterfront Strike (also known as Bloody Thursday), many terminals at West Coast ports will be closed. Combined with the July 4th holiday, you may experience delays for cargo arriving into West Coast ports.

New taxation system in India may cause delays

If you’re shipping out of India, be aware that the country is implementing a new, unified taxation system -- the Goods and Services Tax -- on July 1. As Indian Customs and businesses work to adjust to the new system, there may be delays.