Ocean and air freight rates and trends for the week of March 14, 2018. 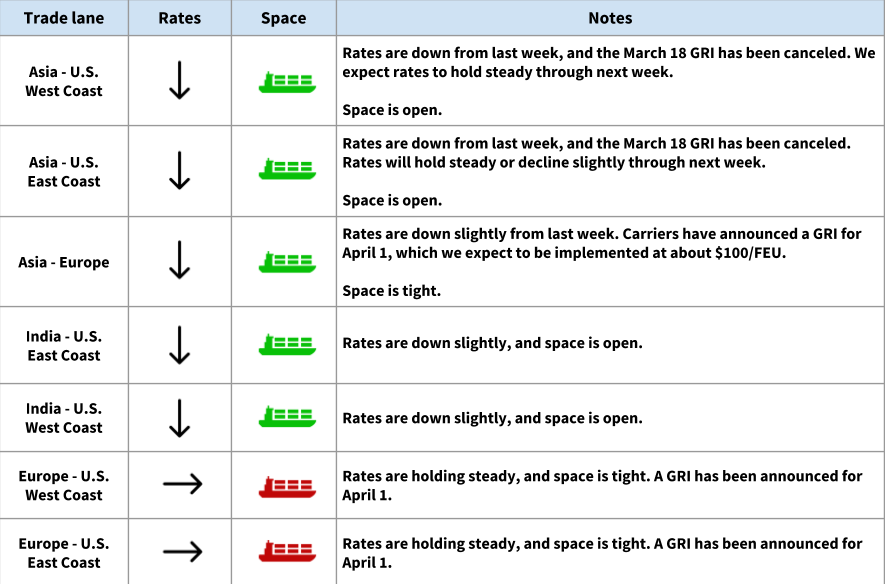 Rates are down slightly this week

The March 18 GRI was canceled, and rates have decreased slightly from last week. Carriers have announced a GRI for April 1.

New services will be announced, and we’ll see changes to some strings served by THE Alliance -- different ports of call, and more capacity to the Southeastern US. 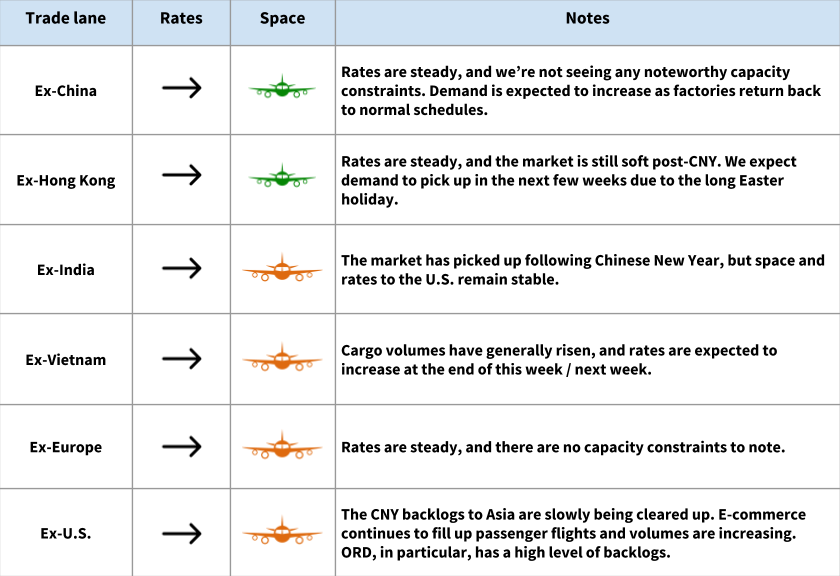 The air market is heating up in March

Chinese New Year was late this year, which helped prevent rates from rising too much before the holiday. The market was slow for a couple of weeks after CNY, as factories ramped back up to full production.

Now that we’re in March, the market is picking up steam -- we’re seeing some capacity constraints, and rates will begin increasing soon. Demand will remain high leading up to the Easter holiday.

IATA predicts that air freight tonne kilometers (FTKs) will grow by an average of 4.9% each year for the next five years. As Air Cargo News reports, “the prediction is based on the assumption that airfreight will continue to outperform global goods trade modestly between 2018 and 2022, although this is ‘a key area of uncertainty and a prime area for our future research,’ IATA says.”

Several factors have converged to make this a tough season for trucking. As the JOC reported this week, rates are still high, and capacity remains constrained: “US domestic trucking spot market rates ended at the second-highest February level in 20 years with shippers seeing little to no pricing relief and continuing the battle to find available capacity on the market.”

Contributing factors include volume, the ELD mandate, and driver shortages. Import volume is up and ports are congested -- and, at the same time, capacity has been removed from the market due to the ELD mandate (which is also contributing to longer transit times). On top of that, there’s a significant driver shortage, and trucking companies are struggling with retention. New capacity is being added, but not quickly enough. Winter weather throws another wrench into the situation.

The US East Coast was hit with another nor’easter this week, and Chicago (which is already very congested) was also hit with some winter weather. If your freight is routing through either region, expect delays.