Ocean and air freight rates and trends for the week of March 7, 2018. 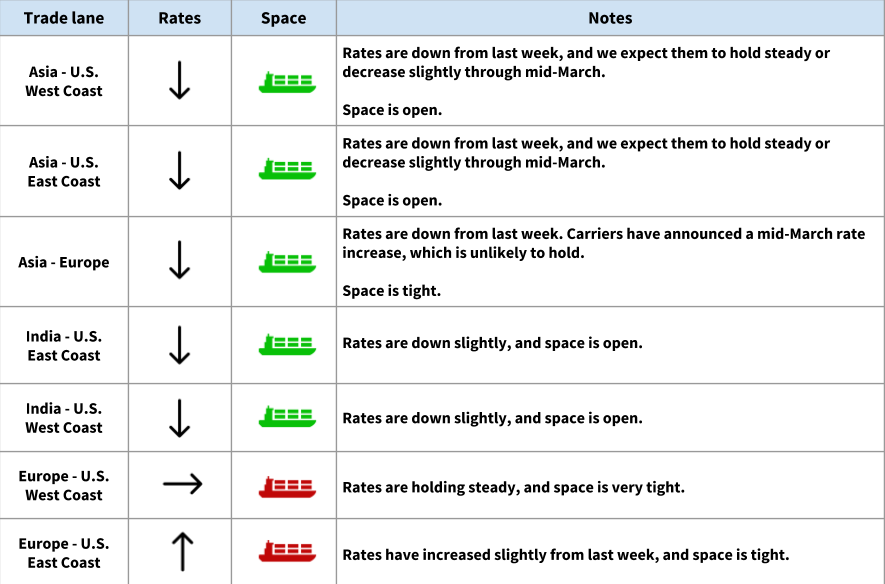 Rates are down this week, expected to hold steady or decrease slightly next week

The March 1 GRI was canceled, and rates are down from last week on most lanes.

Out of Asia and India, we expect rates to hold steady or continue declining slightly through next week.

Rate increases have been announced for mid-March.

The FMC is investigating detention and demurrage practices

The Federal Maritime Commission (FMC) agreed to investigate the application of demurrage and detention fees, responding to claims that these charges are often applied unfairly and that they serve as revenue generators for terminals.

The commission will investigate this year, and plans to publish findings by December 2, 2018. 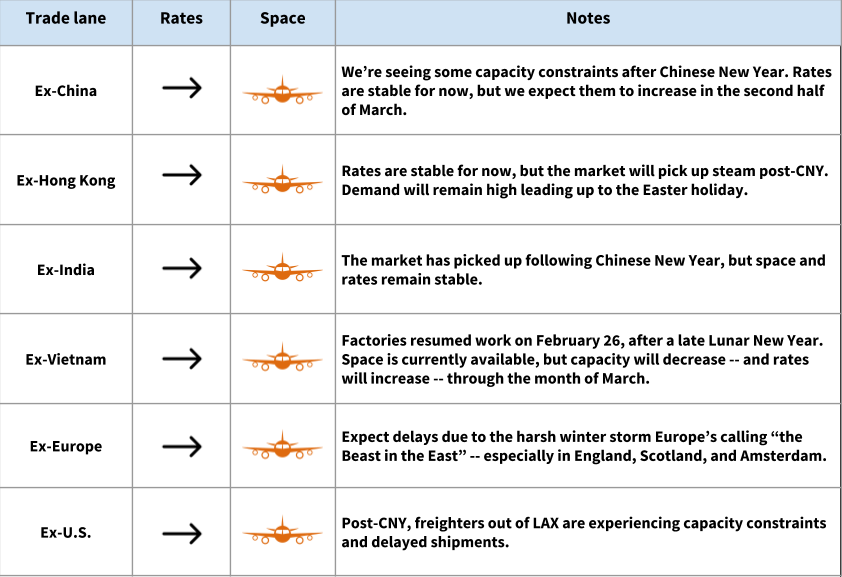 The air market is ticking up after Chinese New Year

Chinese New Year was late this year, which helped prevent rates from rising too much before the holiday. The market was slow for a couple of weeks after CNY, as factories ramped back up to full production.

Now that we’re in March, the market is picking up steam -- we’re seeing some capacity constraints, and rates will begin increasing soon.

Demand will remain high leading up to the Easter holiday, with rates and capacity expected to stabilize come April.

Trucking still constrained in the US and Canada

Import volume is up and ports are congested -- and, at the same time, capacity has been removed from the market due to the ELD mandate (which is also contributing to longer transit times). On top of that, there’s a significant driver shortage, and trucking companies are struggling with retention. New capacity is being added, but not quickly enough. Winter weather throws another wrench into the situation.

One analysis, conducted by the Trans-Logistics Group, noted significant rate increases for trucking in January: “Dry van truckload rates across the United States were up 17 to 25 percent on average in January, compared with a year ago.”

Nor’easter will cause problems and delays in the U.S. Northeast

Heavy snow, wind, and rain will hit New England this week; if you have cargo routing through this region, you can expect delays.

Winter weather creates all kinds of problems for port and trucking operations; weather-related closures can lead to backlogs that might take a week (or longer) to work through.

Last week, the JOC noted major intermodal and trucking delays in Chicago, so severe that “some motor carriers will not accept new customers until April.”

Pre-CNY freight is hitting the West Coast, and we’re seeing longer-than-usual dwell times at the ports of Los Angeles/Long Beach, Vancouver, and Prince Rupert. These ports are averaging dwell times of 6-9 days.