Ocean and air freight rates and trends; customs and trade industry news for the week of November 20, 2019. 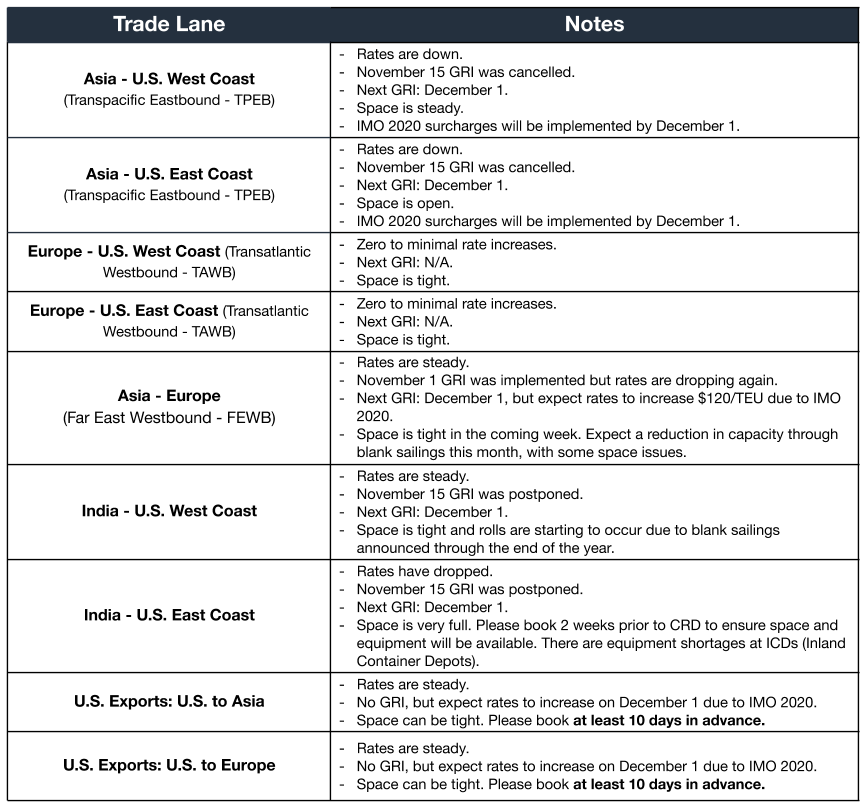 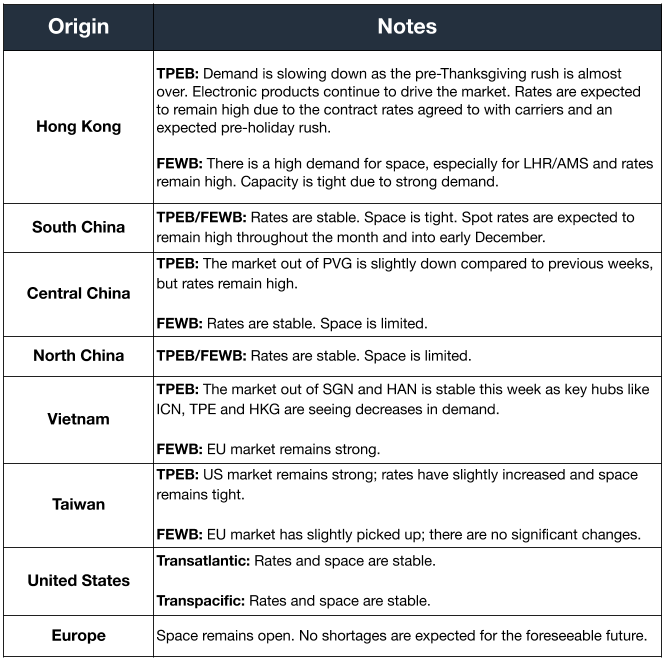 INTERCARGO Faces 2020-Compliant Fuel Scarcity As commercial ships shift to low-sulphur fuel by January 1, the International Association of Dry Cargo Shipowners (INTERCARGO) chairman expresses concerns to Bloomberg News over IMO 2020-compliant fuel availability. INTERCARGO members carry a quarter of the world’s coal, ore, and grain along varied routes and between far-flung ports, where scarcity is likely. Fears include ships drifting “powerless on the high seas” in the name of compliance.

Top Chinese Companies Beat Trade War Predictions A review by Reuters of China’s top 200 companies reveals third-quarter growth of 10% — over market expectations of 2% — despite an ongoing trade war with the U.S. since early 2018.

Brexit Drives Tesla to Germany over UK Tesla plans to open its first European Gigafactory in Berlin with operations starting late 2021, according to Supply Chain Dive. Tesla CEO Elon Musk cited the UK as “too risky” due to Brexit.

Huawei Temporary General License Extension The US Commerce Department Bureau of Industry and Security (BIS) has extended the temporary general license to telecom service providers doing business with Huawei. The extension allows 90 additional days to work with Huawei and its overseas affiliates. While a general license does not relieve companies from US export rule obligations, it lets businesses continue dealings with the telecom giant. Those using general licenses should be aware that they are heavily reviewed and will need to have records available upon request.

DHS Awards Blockchain Contract The Department of Homeland Security (DHS) announced that it awarded $197,292 to Factom Inc to develop a blockchain security system that will assist in detecting fraud involving imports. The main focus of the company is to prevent forgery/counterfeiting of certificates and licenses. It also hopes to enhance digital security through digital issuance of credentials along with certifying the origins of materials. Four phases to the contract with Factom could total up to $800,000 in government funding under the Silicon Valley Innovation Program (SVIP).

CBP Rules Mattress Base is Not Subject to Section 301 Duties Customs recently ruled on the substantial transformation of a mattress base, which had electronic components that adjust the bed’s head and foot positioning. Because the base had 300 parts assembled in Vietnam, Customs ruled that they would be considered "complex or meaningful" assembly operations as opposed to "simple assembly." By having the components lose their identity during manufacture, in this case they have a new origin of Vietnam and are not subject to China's Section 301 duties.

Statistics on Trade Remedies: Adding up Quickly Fresh statistics on the US Customs and Border Protection (CBP) webpage show the total duties collected through November 13, 2019. Section 232 & 301 duties totaled $45 billion, with China Section 301 tariffs collecting $36.8 billion. Section 301 tariffs from the EU, new to the page after going into effect in October, have already collected $34.6 million.