Ocean and air freight rates and trends; customs and trade industry news for the week of November 6, 2019. 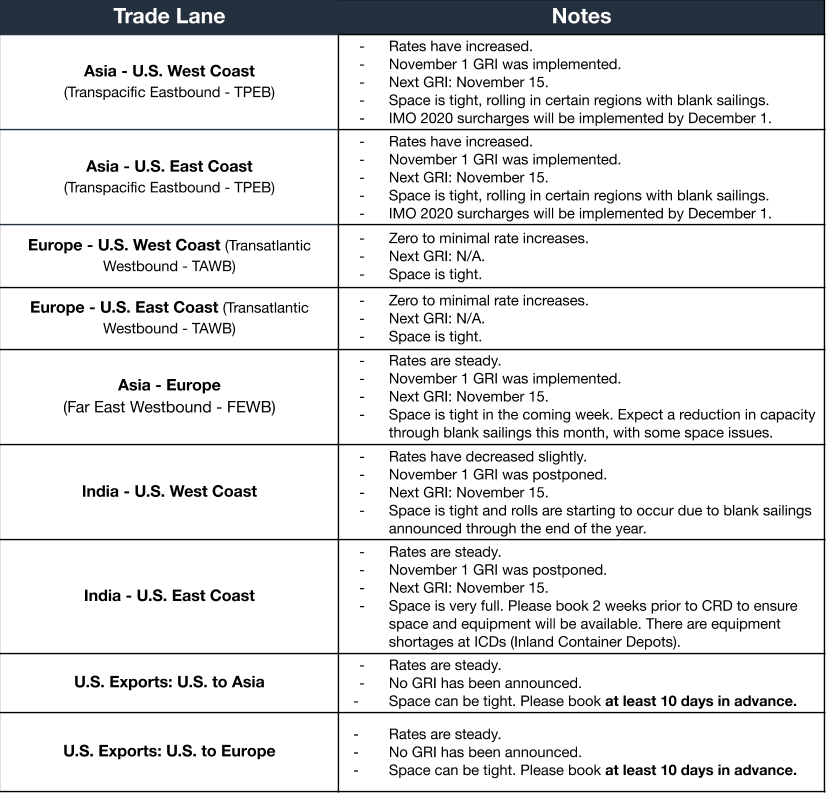 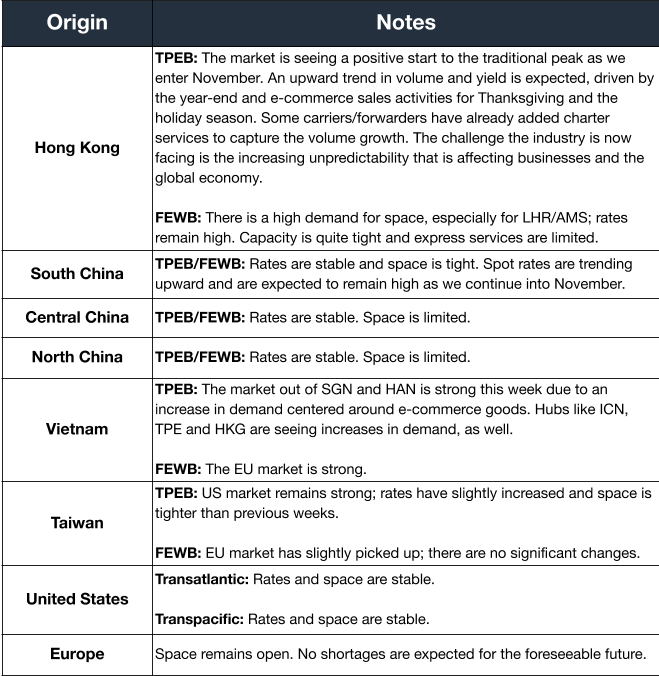 Proposed Demurrage and Detention Rule Invites Industry Input and Debate A rule proposed September 17 by the US Federal Maritime Commission (FMC), which allowed for a comment period that closed on October 31, “drew heavy input from industry organizations and companies,” according to FreightWaves. The rule comes after an investigation into demurrage and detention fees that many shippers and non-vessel-operating common carriers (NVOs) felt were unfair—since, as the executive director from The Agriculture Transportation Coalition (AgTC) notes—oftentimes it is not the shippers’ fault that they are unable to access their containers in the prescribed windows of time. The proposed rule provides guidance for what constitutes fair and reasonable fees. The AgTC believes that exporters, NVOs, and truckers are likely to support the draft as it stands.

As Trade Tensions Heat Up, Global Demand Cools Reuters reported last week that factory output for October was once again slow, according to purchasing managers’ index reports across the US, Japan, South Korea, the UK, and others. The ongoing uncertainty tied to US-China trade friction and Brexit is believed to be a factor. In the US, interest rates were cut for the third time this year. Japan, meanwhile, held steady but hinted it might reexamine rates in the near future. Canada is the only G7 country that has seen an expansion in manufacturing, two months running. Meanwhile, this week, Flexport Chief Economist Dr. Phil Levy noted the following economic highlights:

Exclusion Requests for List 3 & 4 Could Take A Year to Review The recent exclusion requests for list 3 and the ones currently being filed for list 4a may take up to a year to review, according to a Federal Register release. Not only that, previously granted exclusions that are set to expire are also being lumped into the lengthy review process. To deal with its large backlog, the office has refined some of the ways it is looking at the 45k-plus exclusions that were submitted. The good news: Reviews of the requests submitted for Lists 1 and 2 have been completed.

CBP Issues Guidance on Mitigation for Wood Packaging Materials Penalties CBP recently published guidelines for importers to help mitigate penalties for not conforming to wood packaging materials regulations. Back in 2017, CBP vowed to increase the frequency of penalties on the wood packaging materials to spur more compliance with the rules. The fine: $5,000. With the new guidelines, first-time violators will be able to reduce the cost of violation to 1-10% of the penalty amount. A second violation can be reduced to between 10-25% of the amount. Any violations beyond three times can be mitigated no lower than 25% of the penalty amount.

EPA Sets New Rules for 8 Chemicals Under TSCA The EPA issued significant new user rules (SNUR) for 8 chemicals under the Toxic Substances Control Act (TSCA). Under the rule, chemicals are now subject to premanufacture notices; anyone who manufactures, processes, or imports the chemicals will now have to notify the FDA at least 90 days in advance. Importers of these chemicals will need to have their compliance match the SNUR requirements. The rule takes effect on December 27. The EPA also announced that it is looking at 26 other chemicals that would require more SNURs. Comments are open on these proposed chemicals until December 4.

For a roundup of tariff-related news, visit Tariff Insider