Ocean and air freight rates and trends; customs and trade industry news plus Covid-19 impacts for the week of October 11, 2022. 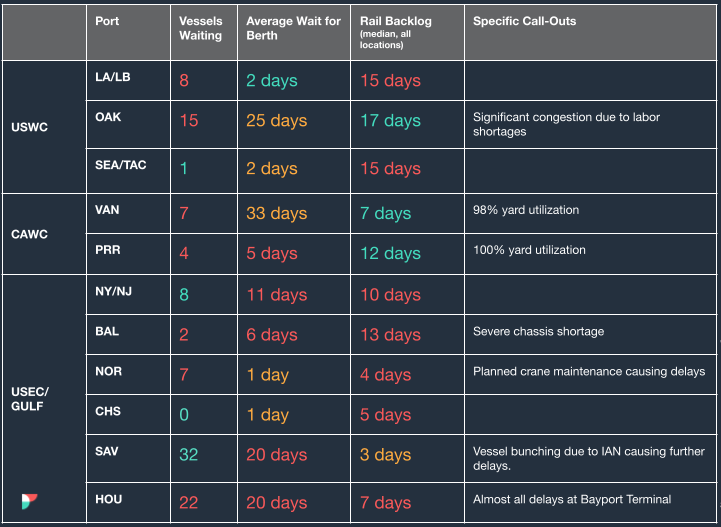 The Food Safety Modernization Act requires U.S. and foreign food facilities engaged in manufacturing, processing, packing, or holding food for consumption in the United States to submit biennial registration information to FDA every even-number year. Failure to register may result in the revocation of a facility’s ability to import or export food into or from the U.S. The current renewal period will close December 31, 2022.

On October 4, the Department of Commerce published a final rule that 57 entities have been added to the Entity List in response to the Russian Federation’s invasion of Ukraine, effective September 30. Exports to these entities will require a license for all items subject to the Export Administration Regulations, and applications for such licensees will be generally reviewed under a presumption of denial.

According to Supply Chain Dive, the Port of New York and New Jersey’s updated container dwell fee went into effect on Saturday, which mandates carriers to balance their inbound and outbound container volumes. Previously, ocean carriers were required to remove 10% more empty containers than their import quarterly total.

Across the air cargo industry, rates and volumes continue to decline, as reported by The Loadstar. In September, rates dropped 19% YoY along Hong Kong to North America, while 42% out of Shanghai. This is exacerbated by lower air volumes, which continue to weaken.

Taking Stock of the Supply Chain Crisis - The State of Trade

Flexport’s State of Trade Webinar on September 28th, 2022 found evidence of an improvement in the state of logistics networks, though it is stronger in pricing than in the timeliness of shipping. Looking ahead, there are considerable unknowns including persistently high consumer spending and the evolution of corporate inventory strategies.

Last week’s U.S. jobs report offered both a very low unemployment rate and a small decrease in the labor force. On balance, though, the labor market looks historically strong. This offers little sign of a recession and little relief for Fed concerns about inflation.