Recent news and updates related to the ocean and air freight market for the week of September 7, 2017. 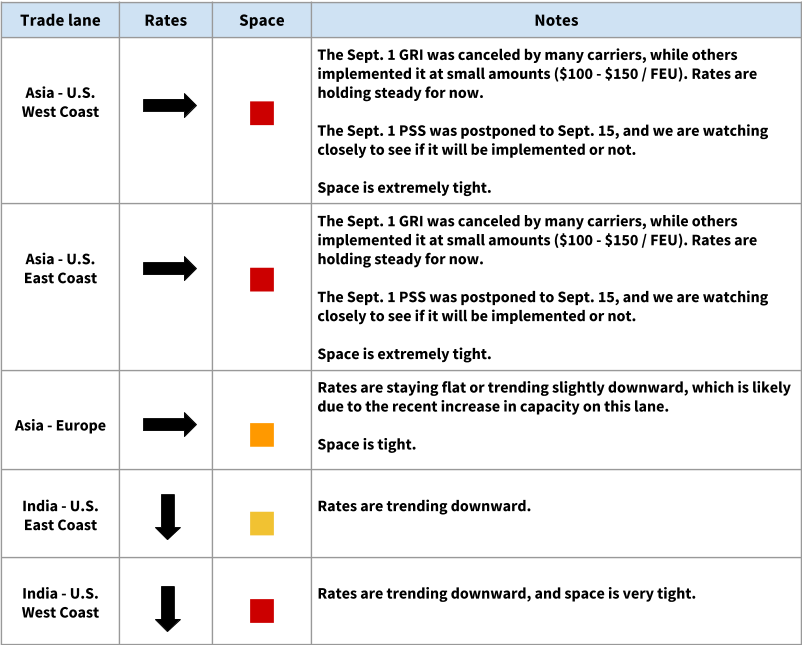 China will celebrate Golden Week October 1-8, during which time factories will be closed.

Hurricane Irma will cause delays and disruptions in the Southeastern U.S.

Irma, a Category 5 hurricane, may hit the mainland U.S. this weekend. Evacuations and preparations are in progress in Florida. Container terminals at the Port of Miami have announced closures for Thursday and Friday, and depending on the path of the storm, we may see similar announcements from other ports in the region (e.g., Jacksonville and Savannah).

Trucking, rail, and warehouse operations are limited in North Carolina, South Carolina, Georgia, and Florida, which will impact inland-bound cargo arriving in the southeastern U.S. We're keeping a close eye on the situation, and will continue to share updates.

Rates are still high, and capacity is still tight

For  months, air rates have been high, and space has been tight. All of Asia is officially in peak season, and several product launches are expected this month (including the new iPhone). This spike in demand will further constrain space and drive up rates.

As Irma approaches the U.S. mainland, airlines are announcing cancellations to and from major Florida airports. We’ll be keeping a close eye on delays, reroutings, and cancellations in the region.

Port Houston is now fully operational. Free time was extended for containers through Monday, September 4, with demurrage and detention clocks resuming on September 5.

Road conditions continue to improve in the Houston area, though some roadways are still impacted by water releases from the flood control reservoirs.

The rail embargo has been lifted, and rail operations are back up and running. Trucking rates have gone up significantly in the wake of the hurricane.

Factory closures in ChinaThousands of factories have shut down in China after a series of inspections by the Ministry of Environmental Protection. At this point, the closures are concentrated in Jilin, Shandong, Zhejiang, Chengdu, and Chongqing; factories in Guangzhou will soon be impacted as well. Read more about the closures here.

Peak season is creating major backups at Amazon FBA centers on the West Coast. Reno, in particular, has been rescheduling inbound deliveries.

Truckers have reported long lines and wait times, so, if your cargo is bound for an Amazon FBA center on the West Coast, you may encounter delays and trucking wait fees.