Brexit Update: Prepare for Implementation in 2021

Yes, Brexit is officially here, but it will take until January 1, 2021, for the transition period to end and the rules of trade between the UK and EU to actually change. When that happens, the impact of the UK’s departure from the EU will go from pro forma to profound, especially for companies involved in the £291 billion of UK exports to the EU or £357 billion of EU imports. The best strategy for now is to gain a clear understanding of the process, the challenges, and what steps can be taken to prepare.

Even though the single market will continue as usual until 2021, one year is still an incredibly short timeline to work out a free trade agreement (FTA)—something that both sides say is their goal. By comparison, the EU’s free trade agreements with Canada and Japan each took about seven years to negotiate. But tight deadlines are not the only thing making negotiating this FTA uniquely challenging. Such agreements normally seek convergence in order to facilitate trade; in this case the negotiations are about divergence. The result of Brexit will be a breakdown in alignment between the EU and the UK on economic and political fronts, a shift that will happen very soon.

The first item on the to-do list for the EU’s member states to agree on, and for the European Commission to approve, is a negotiating mandate to empower and guide the EU’s team at the talks. This important piece of the puzzle is due February 25th, leaving only 10 months to negotiate, conclude, and ratify the FTA.

With such limited time, both parties will have to prioritize the issues deemed most important. For the UK, this will likely include continuing to easily export financial services. For the EU, it will include preserving their ability to fish in British waters. Making matters more complicated, the EU has set a “level playing field” as a non-negotiable component of any trade deal. The UK has already expressed it is unlikely to agree to a trade deal on such terms as they would, for example, prevent industry in the north of England from receiving state aid.

Britain’s politicians insist that Brexit will return them to being rule makers, not rule takers. Yet the EU’s regulations are likely to continue to serve as de facto global standards for many companies — including British companies — pursuing foreign markets. It’s not clear what will convince either side to compromise with the other.

With all this in mind, and assuming differing priorities during an already tight schedule, there is a strong chance that any FTA will be a bare-bones trade deal — with agreement only on key issues and the remainder of negotiations delayed until after the the transition period. Additionally, the risk of a no-deal exit still exists: for the movement of goods and services that means that if no agreement has been reached by January 1, 2021, the UK and EU would revert to trade on WTO terms, meaning no preferential treatment and all the usual complexities of international trade on either side. To prepare now, businesses can:

Various (soft) deadlines in the negotiations have already been set. While this timeline may change as the negotiations progress, it’s useful to gauge progress (or its lack), and a reminder to schedule your own preparations for what may be momentous changes on the first day of 2021.

Learn more about Flexport Customs services, which can provide insights into how to plan your freight forwarding amid evolving geopolitical circumstances. 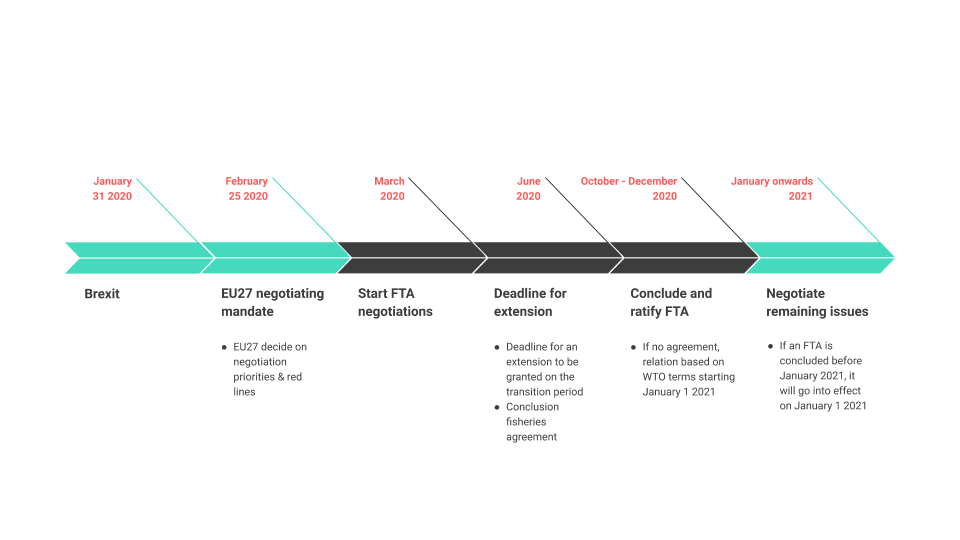