Does Trade Reduce Poverty? An Analysis from Our Chief Economist

Global trade is a force for good.

Flexport’s mission is to make global trade easy for everyone. There’s good reason for that: the impact of trade extends far beyond business. Trade is essential to raising communities out of poverty and improving quality of life.

While trade may not be able to alleviate poverty all by itself, we rarely see large declines in poverty without trade openness and growth. According to research from the World Trade Organization and World Bank Group, “Trade has played a critical role in poverty reduction...the further integration of developing countries into an open global economy will be essential for achieving the goal of ending extreme poverty by 2030.”

The avenues by which trade reduces poverty can be static or dynamic. On a static level, a classic trade theorem (Stolper-Samuelson) asserts that by raising the relative price of goods, trade can bring increasing returns to low-skilled labor, which is relatively abundant in developing countries. Dynamic factors, meanwhile, cause growth, enhancing sectors intensive in low-skilled labor (e.g. textiles), sparking increased revenues for redistribution, and increased demand for non-traded services.

In its landmark 2015 report The Role of Trade in Ending Poverty, the WTO similarly outlines how trade stimulates economic growth required to assist the impoverished by:

The WTO also notes that trade is especially vital to empowering women in impoverished circumstances. From the 2015 report, “Increased trade openness over the past three decades has brought new job opportunities, has often increased returns for women working in export-oriented sectors, and has increased incentives to remove gender biases and discrimination.”

Three decades ago, more than half the world’s population in extreme poverty resided in China and India. Though there were important differences in the two countries’ experiences, both nations undertook trade reforms and dramatically reduced tariff rates.

Professor Mitra describes the effect on trade liberalization and poverty reduction in China, “From 1992 to 2009, the proportion of the population living on less than US$1.25 a day, the international measure of extreme poverty, fell from 69% to 12%, while GDP grew at an extremely rapid rate of more than 8% a year, often hitting double digits. During this time, some 700 million people were pulled out of poverty.” 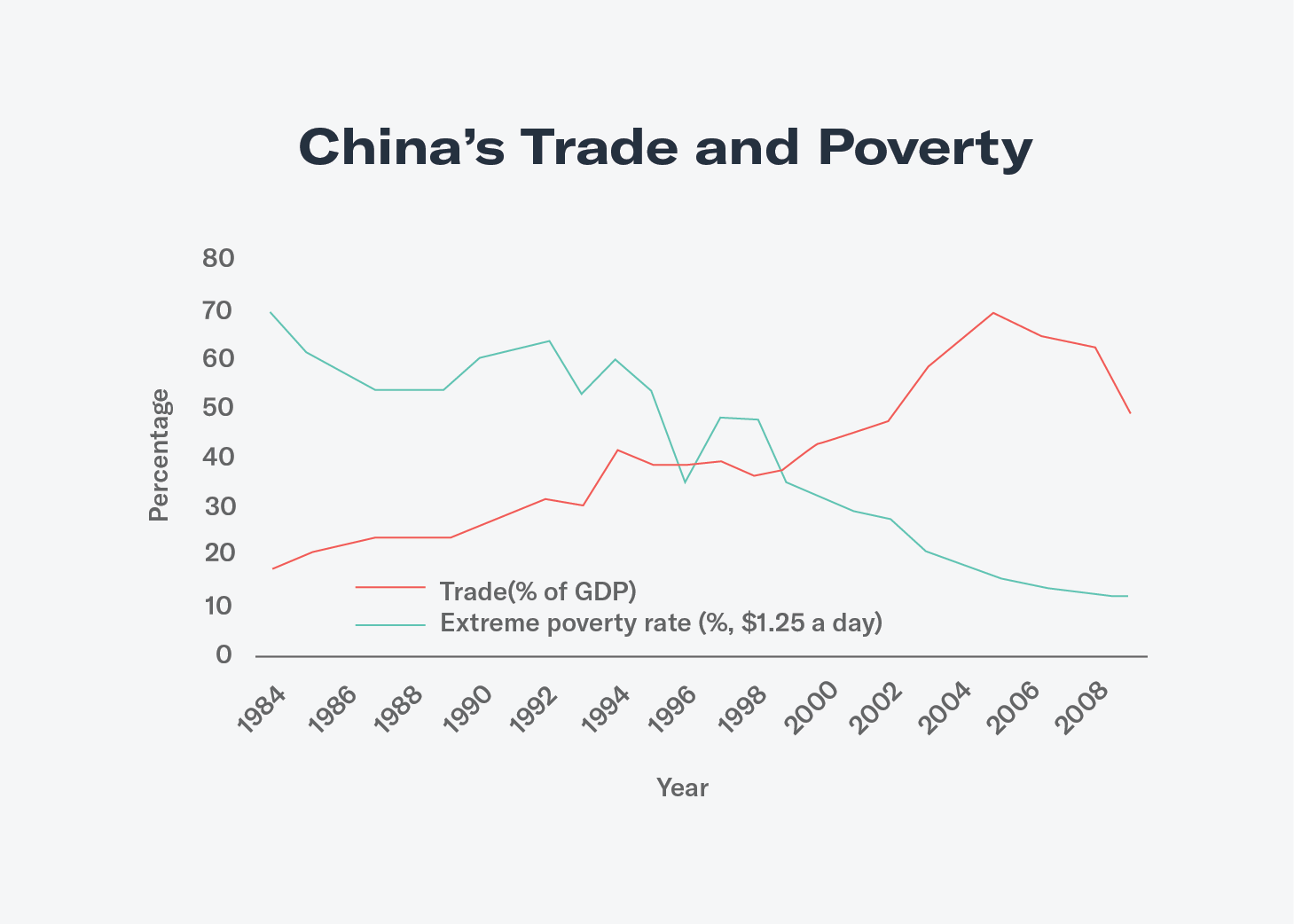 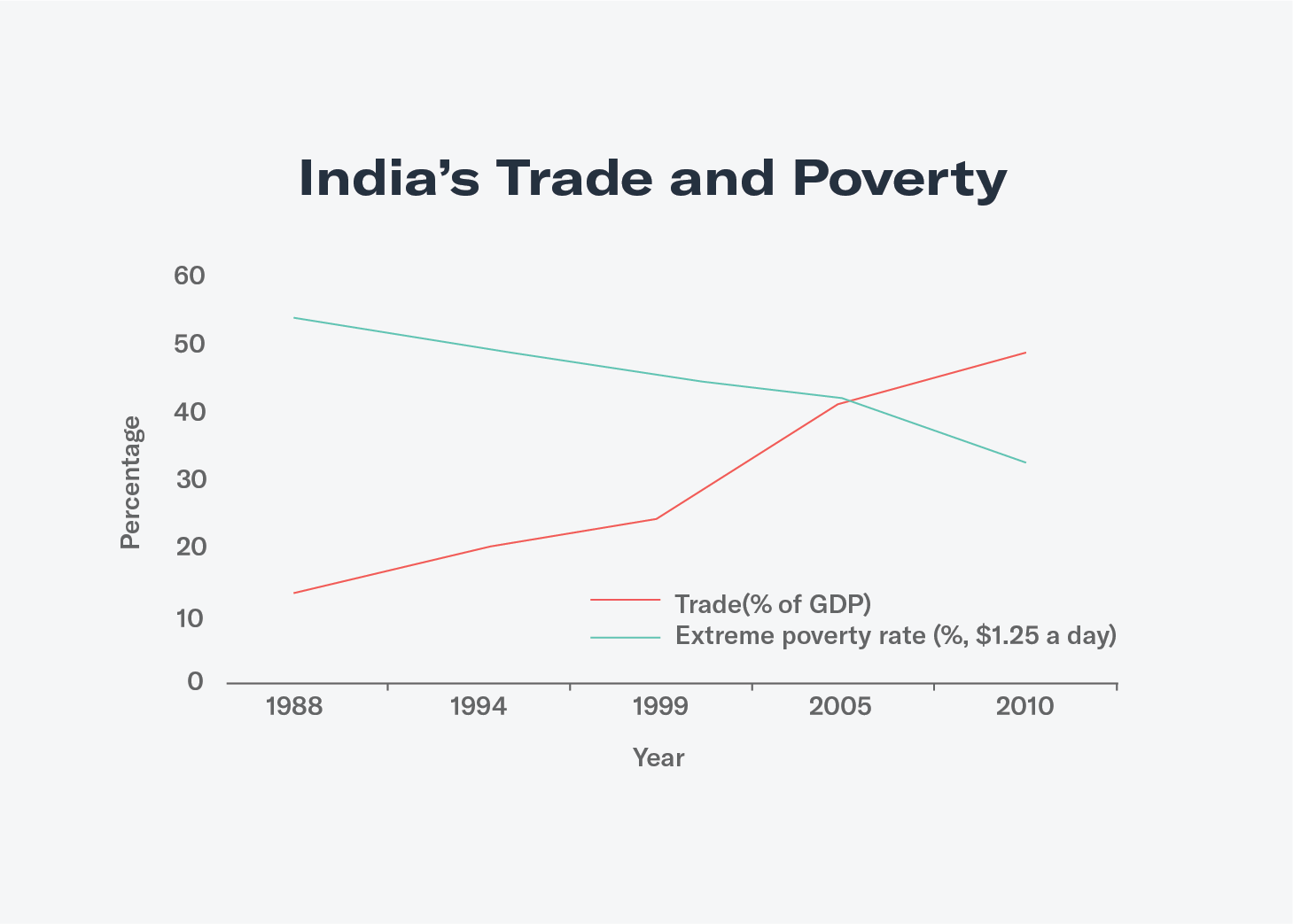 Why Is an Empirical Linkage Complicated?

There is a strong sense in the literature that trade openness is a necessary but not sufficient condition for poverty alleviation. That poses some difficult questions. If a country opened to trade, but did not undertake the necessary accompanying measures, is this a failure of trade to alleviate poverty? Or, if the country did undertake the necessary accompanying measures, what share of poverty alleviation is attributable to trade versus other measures?

According to the WTO, not all impoverished people are affected equally by trade. The effects depend on:

The problem is compounded by measurement issues. For trade, should one look at openness (e.g. trade/GDP)? Or policy measures (e.g. tariffs)? For poverty, is one looking at the incomes of the lowest quintile? Different approaches give different answers.

Then there are questions about endogeneity and causality – does trade cause growth or does growth cause trade? That said, even without establishing clear causality, the broad relationship between trade and rising prosperity is pronounced.

Flexport operates with the belief that nothing has lifted more people out of poverty in the last half century than the shipping container – just as nothing is likely to do more to raise communities than the Internet. How lucky we are to be realizing our mission by bringing these two forces together to help enable an even greater good.

A quick postscript: Flexport actively works to make logistics a force for good through Flexport.org, which is dedicated to helping clients, NGOs, nonprofits, and donor organizations deliver humanitarian aid. Check out this article and video to learn more about how we’re bringing people together to fix the broken shipping aid model.

ShareTweetShare
About this author
Phil Levy