Flexport attended 2019’s Lesbians Who Tech + Allies Summit a few weeks back, and returned from the event enlightened, empowered, and with donations facilitated by Flexport.org.

Instead of spending money on swag to give away, Flexport decided instead to redirect those funds to organizations that inspire us and support the LGBTQ community. At our recruiting booth, conference attendees could choose one of two organizations for Flexport to make a donation on their behalf: The Trevor Project or Lesbians Who Tech’s Edie Windsor Coding Scholarship. 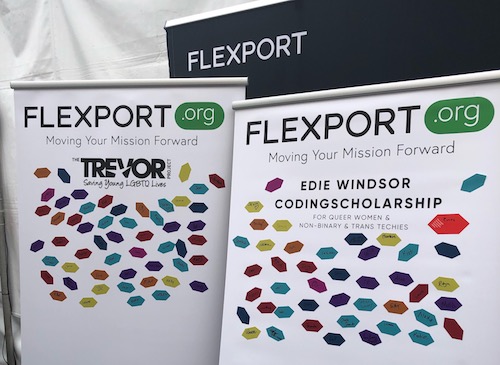 The Edie Windsor Coding Scholarship Fund is a Lesbians Who Tech scholarship that provides LGBTQ women and non-binary and transgender students an opportunity to kickstart their career in technology. These coding schools are often more accessible to members of underrepresented communities than traditional four-year institutions.

$10,000 was donated at the end of the three-day conference, almost evenly split between the two organizations. Flexport donated $5,200 to the Trevor Project, which is equivalent to 20 counselor trainings or 173 thirty-minute sessions on the crisis hotline, and $4,800 to the Edie Windsor Scholarship.

The Flexport employees who ran our booth and attended the conference said they left with personal realizations, as well as several key takeaways, such as:

“It was emotional yet empowering to sit in a theater of 2,000+ people, the majority of whom looked like me, have to face similar adversities in their careers as me, and who care deeply about the LGBTQ community like me.” - Franni Weinberg, Employee Onboarding Program Associate

Thanks to everyone who visited and learned more about Flexport and our commitment to diversity and inclusion in the workplace!