Ocean and air freight rates and trends; trucking and customs news for the week of July 3, 2019. 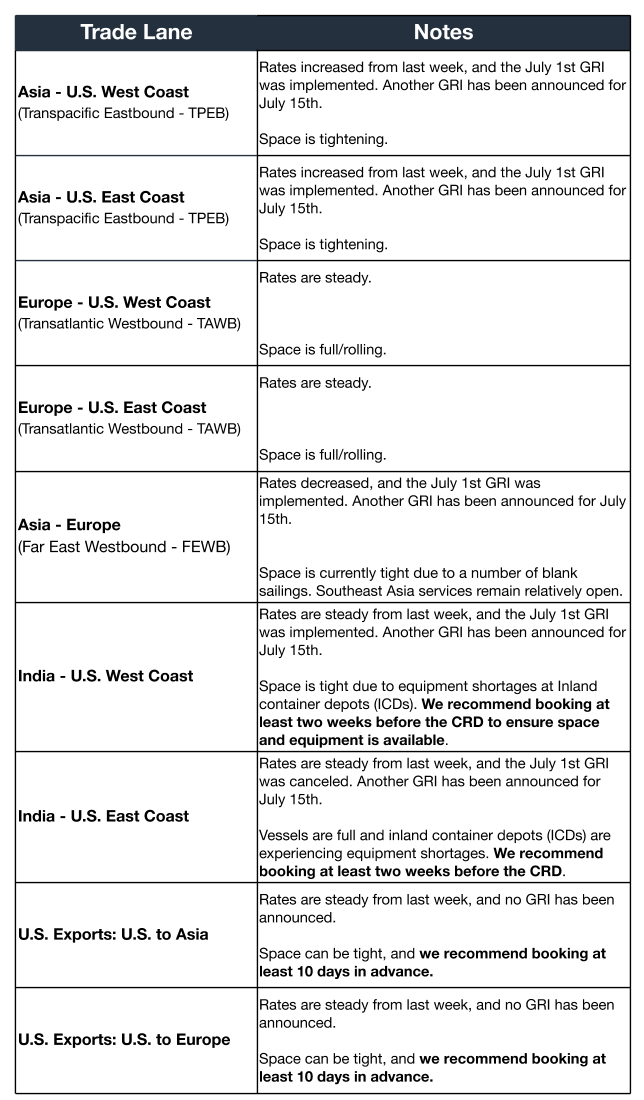 The U.S. Commerce Department has imposed duties of more than 400% on steel imports from Vietnam. The measures are a response to an increase in countries re-routing goods through Vietnam in order to bypass higher tariff rates. Most notably impacted are corrosion-resistant and cold-rolled steel products from Taiwan and South Korea that received minor processing in Vietnam prior to export to the U.S.

As the Brexit deadline of October 31, 2019, continues to loom, some shippers are taking direct action to protect themselves from the uncertainty of Britain’s exit from the EU. All commercial vessels must register with a country for safety and environmental regulatory reasons. These vessels must also pay appropriate taxes to their country of registration. With Britains relationship with the EU post-Brexit in question, fleets are leaving Britain to register elsewhere, putting the nation’s tax income at risk.

USTR Proposes Tariffs on EU in Response to Aircraft Subsidies

On July 1st the USTR put out a press release stating that due to the WTO dispute with the European Union on subsidies on large civil aircrafts, it will add on a supplemental list of tariffs which adds 89 tariff subheadings to the previously proposed list which totaled $21 billion. The new supplemental list is adding tariffs on $4 billion worth of goods based on 2018 trade value. Hearings for the supplemental list of goods are scheduled on August 5th through 12th. This means, even if the WTO arbitrator rules on the subsidies case the supplemental list can't go into effect until after those hearings conclude. The original list can be implemented immediately once the WTO arbitrator issues its decision. The possible additional ad valorem rate hasn't been released but could be up to 100 percent.

The talks were seen from the US side as progressive and positive, and reports from Chinese outlets on the meeting weren't quite as rosy. Overall nothing changed as far as the safeguard tariffs go. For now, they will all remain in place. The heavily opposed List 4 has been put on hold for the moment, and there is no timeline for how long they are going to hold off the implementation date. President Trump can implement them anytime he chooses to now that the hearings have concluded.

Congressional Research Service released a general overview of possible regulations and applications involving the use of blockchain within international trade. There are cases to be made for a wide array of uses, but they highlighted its use within supply chains for verifying goods and tracking them, while also possibly being able to attach documentation such as certificates and verifications for IPR. It could also be used to track and recall products and help with oversight of a supply chain. CBP has already started testing some free trade agreement certifications to varying degrees of success. This will be a tool that is used in the future by many countries so it is a priority for the US to get involved with the technology.