Ocean and air freight rates and trends; trucking and customs news for the week of July 24, 2019. 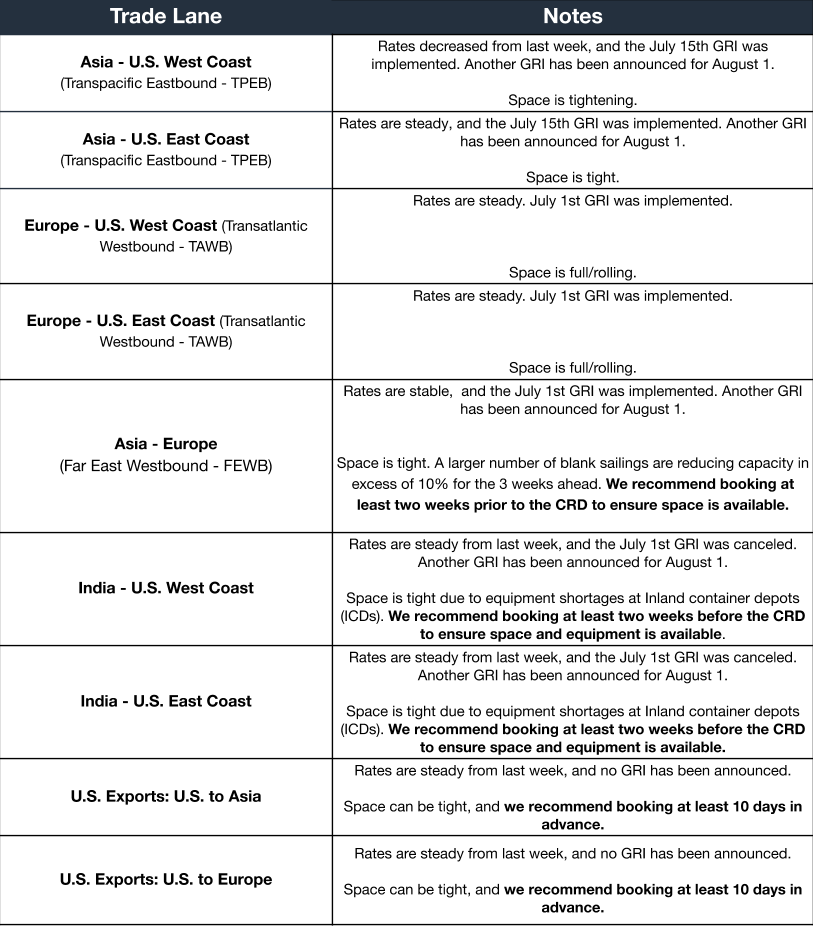 According to the latest Trade Monitoring Report from the World Trade Organization, trade-restrictive measures continued at unprecedented levels from mid-October 2018 to mid-May 2019. The report notes that restrictive measures introduced over the period are estimated at USD 339.5 billion making this window the second-highest recorded.

Report: More than 80% of Fashion Companies Planning to Move Away from China

Rising tariffs and the ongoing trade war are causing a significant portion of fashion companies to reduce sourcing within China. According to the report from the US Fashion Industry Association, this number is up from 67% in 2018. 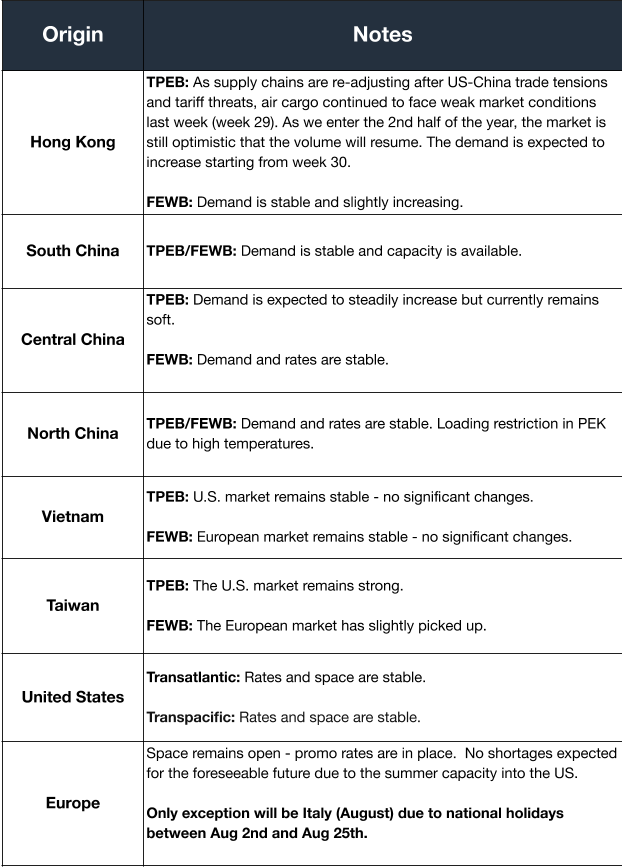 The bipartisan Defending America's 5G Future Act (H.R. 3759) has been introduced by members of Congress to put heavy restrictions on China's telecommunications equipment giant, Huawei Technologies Co Ltd. The bill would codify an executive order to prohibit Huawei from being removed from the Bureau of Industry and Security (BIS) Entity List, essentially a trade blacklist, unless the Department of Commerce certifies that the company has not engaged in the theft of U.S. intellectual property and does not pose a threat to U.S. telecommunications systems or critical infrastructure, among other requirements. The bill would also give Congress the power to block waivers given to U.S. companies to do business with Huawei. The introduction of this bill comes as the Trump administration has reportedly been seeking to revive trade talks with China and allowing U.S. businesses to re-engage with Huawei as part of a larger trade deal.

Increased Compliance and Enforcement of Antidumping and Countervailing Duties

In 2016, the U.S. Government Accountability Office issued a report that assessed USD 2.3B in Antidumping and Countervailing duties (AD/CVD) had gone uncollected. Under expanded statutory authority, Customs began investigating allegations that importers were evading AD/CVD payments through material false statements or omissions on entry documents. These evasions most often took place when importers would transship China origin goods through Vietnam, Malaysia, and Cambodia. The Department of Justice (DOJ) recovered over USD 2.8B in 2018 from False Claims Act cases, where importers deliberately misclassified goods to avoid AD/CVD.

As global trade tensions heighten and the US moves towards importing higher tariffs on goods imported from the EU, trade law firm Sandler Travis & Rosenberg (ST&R) says the first sale rule can be used to mitigate the impact and reduce costs. Under the first sale rule established in litigation by ST&R more than 30 years ago and passed in legislation in 2008, the dutiable value of a qualifying transaction may be based on the purchase price between the middleman/vendor and the manufacturer, as opposed to the price paid by the importer to the middleman/vendor, resulting in a lower duty bill.